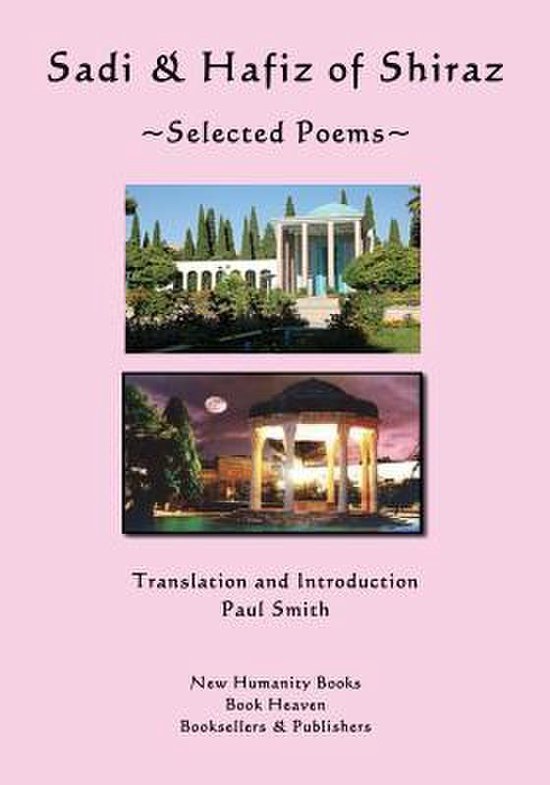 Sadi & Hafiz of Shiraz~Selected Poems~Translation & Introduction Paul SmithSadi of Shiraz, along with Hafiz, Nizami & Rumi is considered one of the great Sufi and romantic poets of Persia (Iran). His masterpieces, The Rose Garden and The Bustan (Orchard) have been a major influence in the East and West for the past 700 years. His Divan of ghazals are still much loved by Iranians. His ruba’is have also been an influence on the poets that followed. Here is a large selection of his ghazals, ruba’is and masnavis. Introduction includes his Life and Times and Poetry. There is aa Selected Bibliography and Glossary of Sufi Symbols. Persia’s greatest exponent of the ghazal Hafiz of Shiraz (1320-139o) became a Perfect Master (Qutub), was twice exiled from his beloved city for his criticism of rulers and false Sufi masters and hypocritical clergy. His Divan shows he composed in nearly all forms. His ghazals, masnavis, qasidas, qita’s, ruba’is and other poems are sometimes mystical and sometimes critical of the hypocrisy of his times. Introduction on the Life and Times and Poetry of Hafiz and a history of the various forms he and Sadi used. Selected Bibliography. The rhyme-structure has been kept as well as the beauty and meaning of these immortal poems of Shiraz’s greatest poets. Large Format 7” x 10” Pages 431COMMENTS ON PAUL SMITH’S TRANSLATION OF HAFIZ’S ‘DIVAN’.“It is not a joke... the English version of ALL the ghazals of Hafiz is a great feat and of paramount importance. ” Dr. Mir Mohammad Taghavi (Dr. of Literature) Tehran. “Superb translations. 99% Hafiz 1% Paul Smith.” Ali Akbar Shapurzman, translator of many mystical works in English into Persian and knower of Hafiz’s Divan off by heart.“I was very impressed with the beauty of these books.” Dr. R.K. Barz. Faculty of Asian Studies, Australian National University. “Smith has probably put together the greatest collection of literary facts and history concerning Hafiz.” Daniel Ladinsky (Penguin Books author). Paul Smith is a poet, author and translator of many books of Sufi poets of the Persian, Arabic, Urdu, Turkish, Pashtu and other languages including Hafiz, Sadi, Nizami, Rumi, ‘Attar, Sana’i, Jahan Khatun, Obeyd Zakani, Nesimi, Kabir, Anvari, Ansari, Jami, Khayyam, Rudaki, Yunus Emre, Mu’in, Amir Khusrau, Lalla Ded, Mahsati, Iqbal, Baba Farid and many others, as well as his own poetry, fiction, plays, children’s books, biographies and a dozen screenplays.www.newhumanitybooks.com
Toon meer Toon minder