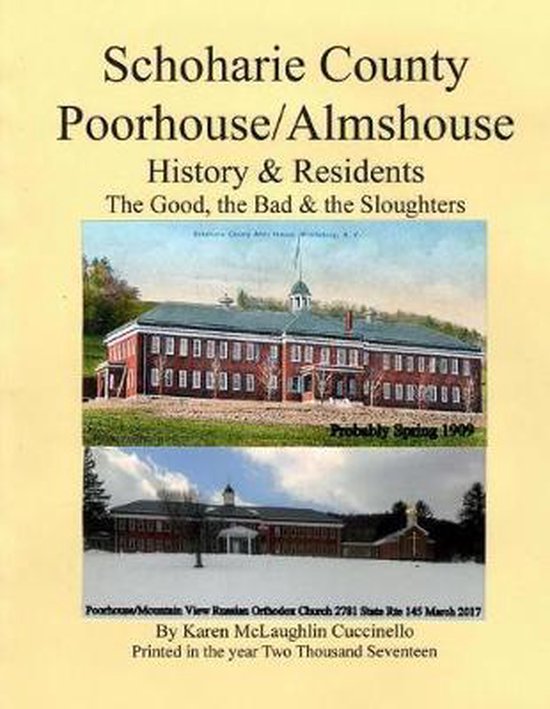 The Schoharie County Poorhouse had a few names but no matter what name you knew it by, if you fell on hard times and had no where else to go, you ended up in the Counties house. There were at least three poorhouse buildings located on what was referred to as the Loonenburg Turnpike or Middleburgh-East Cobleskill Rd. and now 2781 State Rte 145. The County Supervisors purchased some land for a poorhouse in 1826 but it was not used until 1830 when the Supervisors purchased a larger piece of property and appointed Superintendents of the Poor. Previous to 1830 each town took care of their own poor, often by paying people to house them. After 1830, if a town could not accommodate their indigent they would pay to house them at the County Home. A person that needed assistance would apply to their towns Overseer of the Poor for aid. The towns would only assist a person if they lived in their town for at least a year, if not the County would pick up the tab or the State if they were shipped out to another facility. Reasons to enter the poorhouse: old age, no family, no money, no home, no job, sick/injured, mental illness, needed shelter just in the winter, or pregnant with an illegitimate child. The poorhouse was not intended for children or those with mental illness but they ended up there often because there was no place else to go. I would say, the majority who entered the poorhouse went there to die.Records of poorhouse residents before 1850 are nonexistent to my knowledge. Records between 1850 and 1875 are derived mostly from census records and the years 1875-1932 are mostly from the Records of Inmates and the Supervisors Annual reports. Between 1850 - 1947 about 900 people (that I found records for) spent time at the poorhouse; approximately 160 spent time in asylums and orphanages outside of Schoharie County; 220 people died at the poorhouse and of those 65 were recorded as being buried in the poorhouse cemetery but the record keeping was not the greatest so I am sure there were more in every category. People from the community that had no burial plots were also probably buried at the poorhouse cemetery. If you add in all the transients/tramps/paupers who stayed a day or two and those who utilized the facilities from 1830-1850 and 1933-1947, I would say at least 2000 people walked the halls of the poorhouse during it's 117 year history. My book chronicles 1000+ inhabitants.The majority of the people that were cared for were born in Schoharie County or New York State. Of those that were foreign born: about 30 came from Ireland; 23 from Germany/Prussia; 11 from England, 2 from Holland; one from the following - Italy; Canada; Austria; Switzerland; France. One particular gentleman listed as coming from Poland, Holland or France, so your guess is as good as mine.One of the reasons I decided to compile biographies of the poorhouse inhabitants was because I believe everybody deserves a legacy and some dignity no matter what their lot in life. One way to know that a person “walked this earth” would be an inscription on a gravestone but there are no stones in the poorhouse cemetery. Veterans to be honored- ten served in the Civil War and eight served in WWI . Most lived in the poorhouse for short amounts of time but some spent most of their lives there. It was very difficult to find information on poorhouse residents because they were not in the newspapers very often. When I did find information on them in the County records or census' their names were often misspelled and their age was often incorrect. I suspect the cause for the misinformation was either because the person was incapable or the person writing the information was unable to get it correct for any number of reasons. If a person had a common name is was even harder to try and follow them from birth to death. Lots of room for human error.I transcribed the information as written so some of the phraseology is harsh compared to today.
Toon meer Toon minder