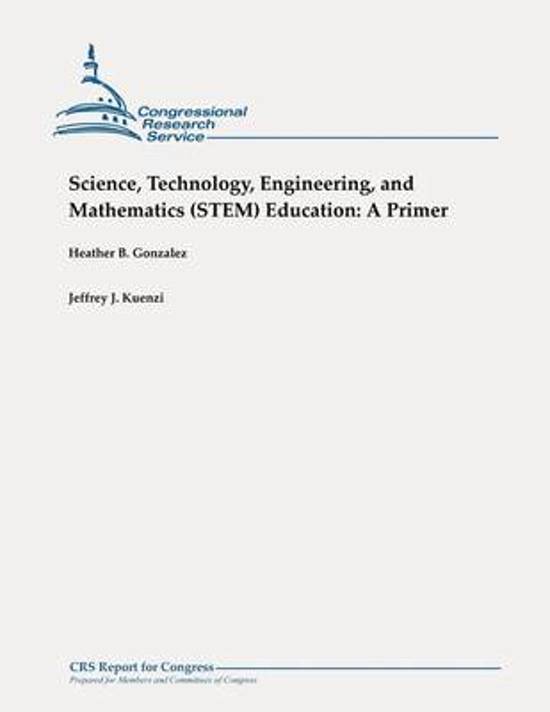 The term “STEM education” refers to teaching and learning in the fields of science, technology, engineering, and mathematics. It typically includes educational activities across all grade levels—from pre-school to post-doctorate—in both formal (e.g., classrooms) and informal (e.g., afterschool programs) settings. Federal policymakers have an active and enduring interest in STEM education and the topic is frequently raised in federal science, education, workforce, national security, and immigration policy debates. For example, more than 200 bills containing the term “science education” were introduced between the 100th and 110th congresses. The United States is widely believed to perform poorly in STEM education. However, the data paint a complicated picture. By some measures, U.S. students appear to be doing quite well. For example, overall graduate enrollments in science and engineering (S&E) grew 35% over the last decade. Further, S&E enrollments for Hispanic/Latino, American Indian/Alaska Native, and African American students (all of whom are generally underrepresented in S&E) grew by 65%, 55%, and 50%, respectively. On the other hand, concerns remain about persistent academic achievement gaps between various demographic groups, STEM teacher quality, the rankings of U.S. students on international STEM assessments, foreign student enrollments and increased education attainment in other countries, and the ability of the U.S. STEM education system to meet domestic demand for STEM labor. Various attempts to assess the federal STEM education effort have produced different estimates of its scope and scale. Analysts have identified between 105 and 252 STEM education programs or activities at 13 to 15 federal agencies. Annual federal appropriations for STEM education are typically in the range of $2.8 billion to $3.4 billion. All published inventories identify the Department of Education, National Science Foundation, and Health and Human Services as key agencies in the federal effort. Over half of federal STEM education funding is intended to serve the needs of postsecondary schools and students; the remainder goes to efforts at the kindergarten-through-Grade 12 level. Much of the funding for post-secondary students is in the form of financial aid. Federal STEM education policy concerns center on issues that relate to STEM education as a whole—such as governance of the federal effort and broadening participation of underrepresented populations—as well as those that are specific to STEM education at the elementary, secondary, and postsecondary levels. Governance concerns focus on perceived duplication and lack of coordination in the federal effort; broadening participation concerns tend to highlight achievement gaps between various demographic groups. Analysts suggest a variety of policy proposals in elementary, secondary, and postsecondary STEM education. At the K-12 level, these include proposals to address teacher quality, accountability, and standards. At the post-secondary level, proposals center on efforts to remediate and retain students in STEM majors. This report is intended to serve as a primer for outlining existing STEM education policy issues and programs. It includes assessments of the federal STEM education effort and the condition of STEM education in the United States, as well as an analysis of several of the policy issues central to the contemporary federal conversation about STEM education. Appendix A contains frequently cited data and sources and Appendix B includes a selection of major STEM-related acts.
Toon meer Toon minder