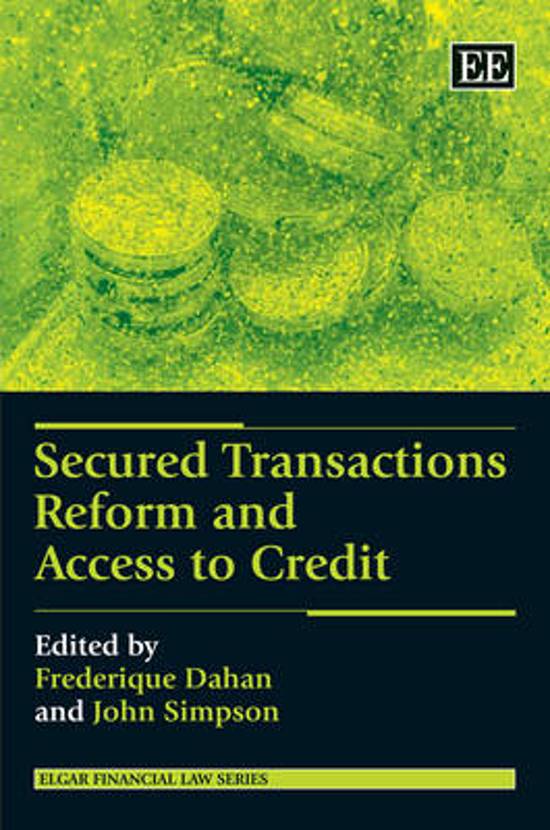 Secured transactions reform, also known as collateral or pledge law reform, is increasingly seen as an important building block for economic development. The commonly held view is that the availability and cost of credit, as well as the efficiency of the market for secured credit, are directly influenced by the laws affecting secured transactions and their implementation. However, there is still a lot of confusion about this relatively complex and technical area of the law and its role in promoting access to credit and economic growth. The chapters presented here provide, for the first time, a comprehensive and cutting-edge view of the subject - from both a legal and economic perspective. They start at the macro level of financial systems, moving towards the behaviours of lenders (commercial banks and micro-lenders), policy options for government and the mechanisms of collateral law reform. By approaching the subject from different angles and experiences, the work advocates an inclusive approach to the subject where all stakeholders' interests can be taken into account. It addresses the question of what role laws and institutions can play to encourage access to credit. This book will be of primary interest to those involved in economic development and the interaction between law and economics, either for practical reasons (for example, working on reform or providing advice on investment in transition economies) or for research purposes.
Toon meer Toon minder

The book is unique. . . It brings together articles on the economics and the law of property rights, and combines these with case studies, observations of what works and what does not, and a checklist of things to watch for. . . This is a very useful book that should appeal to reformers working in the field, whether they are governmental officials trying to modernize their economies, or economists and lawyers working in developmental agencies. . . There are few other books or publications that bring together the views of experts working in this important, albeit somewhat neglected, are of financial sector plumbing.' -- William P. Armstrong, Banking and Finance Law Review . . . a well-presented collection of interesting papers within which one finds a rich resource of information and perspectives on secured transactions reform from parts of the world which are often overlooked in comparative commercial law scholarship.' -- Noel McGrath, Journal of Business Law . . . with its insightful analysis, interesting empirical studies and knowledgeable team of contributors, the book will be illuminating and useful not just for those interested in development, but also anyone who has anything to do with granting credit and taking security.' -- Dora S. Neo, Singapore Journal of Legal Studies This is an excellent, unique book. The material is very well written and presented in a carefully thought-out, coherent way. It tells us a legal story of our own, unique time. Any lawyer working in transition economies, whether or not directly on reform projects, would find it of great interest. Even economists should perhaps take a look at it!' -- Roger McCormick, Law and Financial Markets Review
Toon meer Toon minder