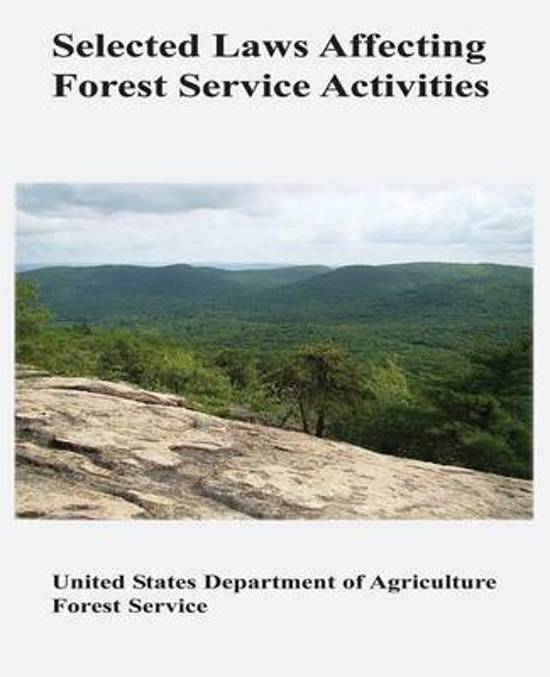 The Selected Laws Affecting Forest Service Activities is the fourth in a series of reference guides published by the United States Department of Agriculture Forest Service. It was created to assist agency staff, and members of the public, as a ready reference document and to understand the legal authorities and limitations of the agency. The first principal laws publication was published in 1978, the second in 1983, and the third in 1993. Although it was originally intended to be a portable reference, the continuous addition of new laws greatly increased the size of the guide. During the development of this document, scoping revealed that many users believed the guide had become too cumbersome to be useful as anything other than a desk reference. The guide’s content, use, and format were evaluated, and it was determined that an abridged version should be prepared. This abridged version does not contain all of the laws relating to the USDA Forest Service. This version does contain the current major laws that apply to USDA Forest Service activities. USDA Forest Service program areas may want to consider assembling a more focused publication of laws and polices that relate to their specific program area. The compilations contained in this publication were put together using the United States Code Annotated Tables for 2003, the United States House of Representatives Committee on Resources Compilation of Selected Laws Concerning National Forests and Related Matters, February 2004, and the Office of the Law Revision Counsel of the U.S. House of Representatives U.S. Code web database. The laws referenced in this book are all public laws. Private laws, those laws involving specific entities or private individuals, are not listed in this guide. Private laws were not included because they are primarily concerned only with specific cases. The laws in this guidebook are arranged by category, such as Forest System Land Management Planning and Forest Service International Forestry. The sections explain some basic terms and how to understand the legal citations provided. A more complete glossary of terms is located in the back of the book. The index provides a quick reference to specific sections of law. The list of National Forests and the means by which the land was set aside can be found in the appendix A. There is also a list of National Grasslands in appendix B. All the laws in this book by chronological order are found in the appendix C. Lastly, other helpful resources are list in appendix D. The United States Department of Agriculture Forest Service (USDA Forest Service) was created by the Transfer Act of February 1, 1905, which transferred the management responsibilities for the Federal forest reserves from the Department of the Interior to the Department of Agriculture. Since 1905, hundreds of laws affecting the USDA Forest Service’s responsibilities, powers, and limitations have been enacted and amended. The Selected Laws Affecting Forest Service Activities is a reference tool for those interested in contemporary USDA Forest Service policy and contains each law as it appears today. The law guidebooks were developed by, and for, the USDA Forest Service legislative staff. However, the guidebooks are referenced agency-wide as well as by numerous organizations and individuals interested in the USDA Forest Service. Scoping was conducted to evaluate the content, use, and format of previous editions of the guidebook. From this information, it was determined that an abridged version would be most useful.
Toon meer Toon minder