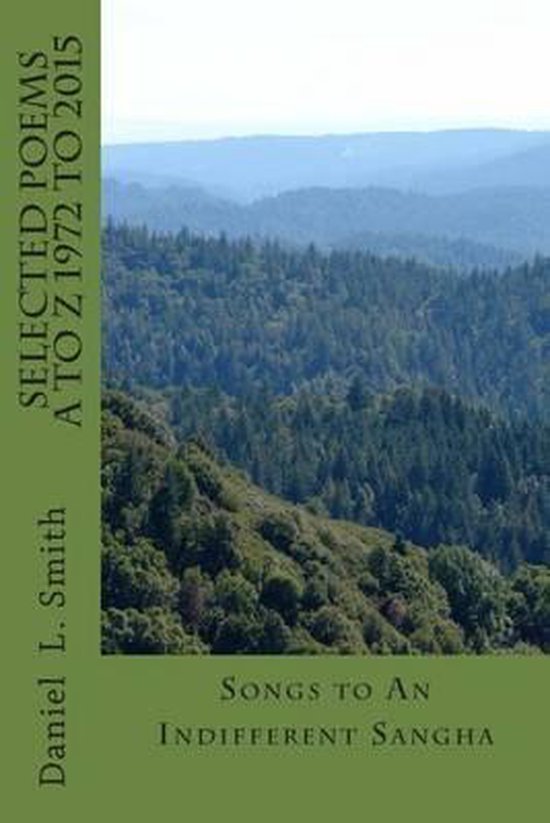 None of these poems, save the exception of the first ten poems, entitled “Adagio Poems,” are found in extant manuscripts of Smith's work. None of the selected poems are part of the early poems found in “The Prophetic Tempest,” or later, post Bread Loaf years in the late seventies and mid-eighties, as in “Something like the Cost of Darkness.” Nor are they part of “Without Thought of Return” or “Coming Home Late,” two smaller collections of poetry of the same time period, 1990’s and later. “Adagio Poems” are addressed to no one but a benevolent creator who has graced us with a bountiful life. The “Adagio Poems” from Spider Lace Dragonfly Mind is included here because, well, the author really likes them. Then, too, they are a prime example of revising, revising, revising -- not the same poems found in the earlier book. These poems, too, may have benefited from ruthless and continual refinement. Smith muses, "I wonder if they ever were to be finished; art perhaps is never finished, only abandoned." He goes on, "Poets are always borrowing, borrowing, borrowing. There is the ubiquitous “you” in several poems, and some are akin to a love poem, a hate poem, a distant hymn, a local observation, all culled from experience. There is a Lolita lurking round many metaphors here. There is lust and anguish and a celebration of life, light, acceptance, mindfulness, compassion, disillusionment, disfavor, stubborn stick- to- it- ive- ness." These are not dark poems but a celebration of the everyday, of the observation, of the impermanence that marks existence a continued theme in Smith's work. If there is some structure, as it may seem to those looking for it, such may inhabit the tenets of a mindful existence, and a life-long search for the meaningful in spite of the illusory nature of what may be termed reality. There are references to distinctly practical exercises from Vietnamese Buddhism, discovered in the midst of the Vietnam War in the sixties."Meaning quite eluded me until the late eighties. I learned to meditate in 1987 when I took my last drink." The productive years of college teaching, attending Bread Loaf, learning to sing the smutty version of “Amazing Grace” with Marvin Bell and Donald Justice, both mentors and poets extraordinaire – all this behind him -- the author sought to improve his conscious contact with a jovial creator. Mentoring by the late John Gardner and the ever wrestling John Irving notwithstanding, and then newly found sobriety, gave way to some thirty years of finding his own visions with the drum. Just as there are references to Buddhist practices evolving over the years, there are references to a life-long practice of specifically Irish shamanism. Indeed, some of the poems, like “Journeys of Dan with Lugh,” and “Suspicions of Spruce and Cedar” combine journal entries of many shamanic journeys with the eastern practice of being in the here and now."A poem or two finds words to express profound loss of my first marriage, the mother of my children, and of two of my children themselves. “Retribution” captures the conflict of dividing property down the middle. More than one poem strikes up a conversation with the daughter whose loss was never sufficiently grieved, and the delight of finding her in non-ordinary reality, as in “Thankful for the Rain on Cape Cod This Morning” may suggest. Or may not." In fact, more than one of these poems blurs the distinction between an illusory but seen reality and the many unseen (for most) multiple universes which constellate daily life on a small planet, “Poetry, Prana, Two Crows,” for example . Other poems celebrate the elements and the elementals, sprites and devas, the faerie universe itself just a hillock away. Poems in this way elucidate more than the world depicted on Tom Robbins’ pack of Camels, itself a mystery unknown to most. Poems in this way center on relationship, as in “Reluctance to Waking / The Entrance to Hell.”
Toon meer Toon minder