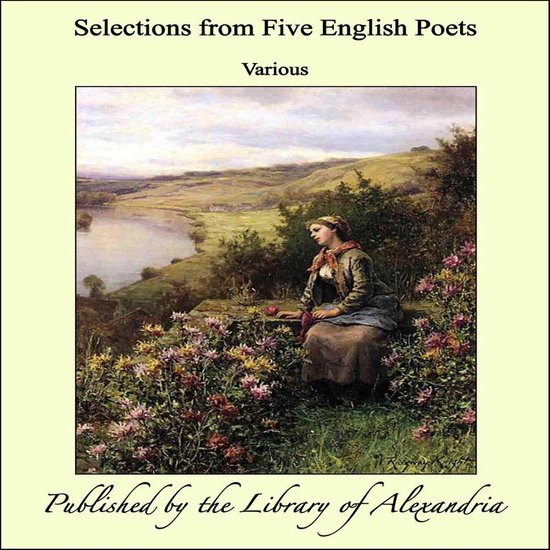 When a poem is read aloud it is easy to realize that poetry is closely related to music. Like music it awakens vague, mysterious feelings which cannot be expressed in ordinary speech; and the person who fails to catch the subtle melody of a poem gets but little from it even though he understands perfectly the meaning of the words. To illustrate this, put into commonplace prose a passage of beautiful verse,—for instance, lines 358-372 of The Ancient Mariner, beginning, ''Sometimes a-dropping from the sky,''—and then compare the prose version with the original. The two will be found as unlike as the flower after it has been dissected by the botanist, and the same flower still on the stalk, opening its petals to the morning sun. The Greeks divided all poetry into three kinds,—lyric, epic, and dramatic poetry, and there is no better general division. The lyric, which is properly a song, expresses the transient feeling or mood of the writer, and therefore is never very long. One must be sensitive to the music of verse to care for a poem of this kind, because it tells no story. Dryden's Song for St. Cecilia's Day and Gray's Elegy, both included in the present volume, are lyrics. Among the most beautiful of English lyrics are Milton's Lycidas, Wordsworth's Ode on Intimations of Immortality, and Shelley's To a Skylark and Adonais; while of American poems of the same kind none is nobler than Lowell's Commemoration Ode. Short lyrics, among which are songs and sonnets, can be found in the works of almost every poet of note, whether English or American. Under the head of epic or narrative poetry are included long productions like the Iliad and the Odyssey of Homer and the Paradise Lost of Milton, and shorter poems, such as Coleridge's Ancient Mariner and _Longfellow's Evangeline. Indeed, every piece of verse that tells a story, however short it may be, belongs with the epics or narratives. Dramatic poetry includes well-known plays like Shakespeare's Merchant of Venice and Julius Caesar, and also certain poems not written for the stage, such as Browning's Pippa Passes and Shelley's Prometheus Unbound. In a dramatic production the poet goes out of himself for the time being, and expresses the thoughts and feelings of other characters. It may have been noticed that in this description of the principal kinds of poetry, only three of the poems included in this book have been mentioned. This is because the other three—The Traveller, The Deserted Village, and The Cotter's Saturday Night—do not fit exactly into any of the divisions. One would class them with the epics rather than with the lyrics or the dramas, but they are not properly narratives, because they tell no story; they are really descriptive and reflective poems. One often comes upon a difficulty of this kind when attempting to classify a poem, and the truth is that several smaller divisions are necessary if every production is to be placed where it belongs. But while it is desirable to know whether one is reading a lyric, an epic, or a drama, it is far more important to enjoy a beautiful poem than to be able properly to classify it. The following list may prove useful to those who wish to know more of the poets represented in this volume than can be learned from the short sketches of their lives which it includes