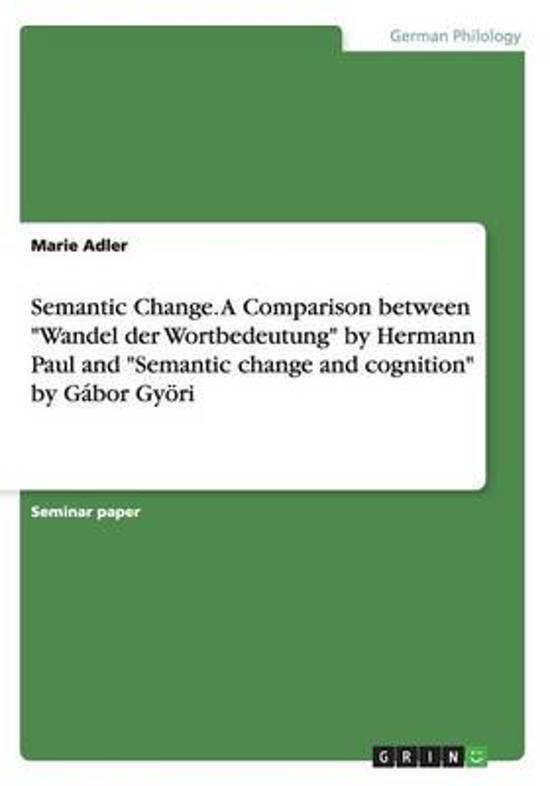 Seminar paper from the year 2013 in the subject German Studies - Semiotics, Pragmatics, Semantics, grade: 1.0, University of Hannover, language: English, abstract: The study of language change has evolved at a high rate throughout the last century. Significant insights have been gained concerning the workings of the human mind and, by extension, the workings of semantic and linguistic change. Set in comparison and contrast, however, it becomes obvious that some convictions have remained stable and still play a role as prominent as they did in the year of 1880. It can even be argued that most of the accomplishments of today's language change researchers strongly build on those of the last century and could not have been achieved without them. To illustrate this assumption, the present termpaper compares two works on language change that were written in two different centuries in two different countries; Prinzipien der Sprachgeschichte (Chapter 4: Wandel der Wortbedeutung) written by Hermann Paul in 1880 and Semantic Change and Cognition written by Gabor Gyori in 2002. Hermann Paul was a German linguist and lexicographer, who was born on August 7 in 1846 and passed away on December 29 in 1921. He was a significant representative of the Neogrammarian school of thought. The cognitive linguist Gabor Gyori is associate professor and head of the department of English linguistics at the University of Pecs, Hungary and has a strong focus on the evolution of cognition and categorization. It shall furthermore be shown that Paul's work shares many of the tenets of modern cognitive linguistics even though that might not be obvious at the first glance, due to differences in terminology and methodology. In order to filter out similarities and differences between both the authors' points of view, chapter 1.1 will briefly summarize the contents of Paul's text, while chapter 1.2 will give an account of the most important tenets of Gyori's work. In chapter 2.1, the terminology Paul a"
Toon meer Toon minder