Serendipity The Genealogy of Tomes, Steel, Raymaley and Schaeffer, Witmeyer and Burger 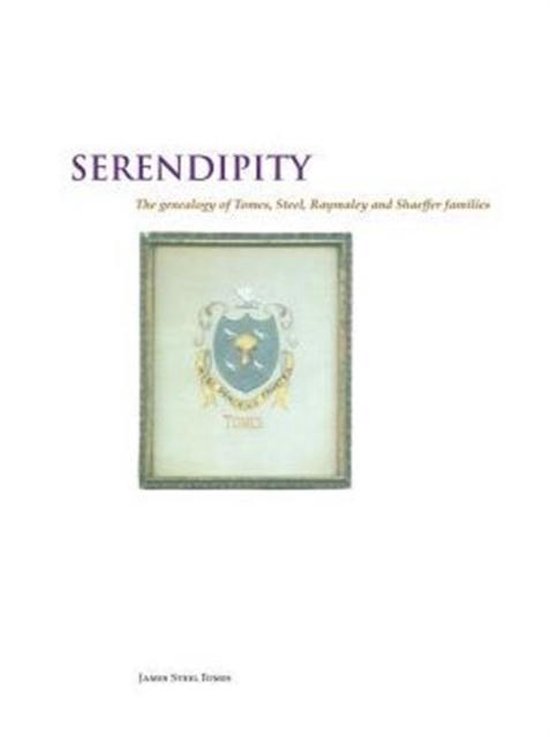 This book, "Serendipity," is the story of the author's forty-five year long genealogical search that ultimately reunited the long separated family of Tomes ancestors and cousins, and the story of his wife's ancestors and family. The search also enabled the author to find and collect the many 19th century books and magazine articles written by his great-grandfather, Dr. Robert Tomes, and also a treasure-trove of Robert's and his great-great grandfather Francis's unpublished journals, letters and memoirs. Most of these manuscripts have been restored, transcribed and published privately, and are now in the special collections of the Newberry Library in Chicago. The search also enabled the restoration of the ancestral Schaeffer dairy farm and cemetery in Pennsylvania. The search is called "Serendipitous" because of the repeated accidental good fortune that propelled the search forward, albeit after many long interruptions. While the author's results were unusually successful, many other amateur genealogists have had similar experiences. The main lesson of this search for other amateur genealogists is to follow up every lead and never give up. Some serendipitous will probably happen to keep the search alive. The book contains a number of short biographical sketches of the author's and his wife's ancestors and current family members. The author's direct ancestor, Francis Tomes, came to America in 1815. Collateral Tomes ancestors started coming to America in the late 1600's. The author's wife is 100% "Pennsylvania Dutch," meaning "Deutsch" - German speaking from the southern Rhine valley - now Alsace in France, and the Palatinate - now north of Strasbourg in Germany and western Switzerland. Her Schumacheree ancestor was with the Mennonite group led by Pastorious who settled Germantown near Philadelphia in 1683. The others soon followed in the 1700's, settling what was then the wilderness of western Pennsylvania. These family stories are not the epic sagas of famous people, but they are the true and often heroic stories of the lives of extended families of real, ordinary people. Most of them emigrated to America beginning in its early days, took great risks and worked hard to live good lives, and mostly, succeeded. Such stories are shared by many American families. They crossed the Atlantic from England, Scotland and the Rhineland to Virginia, Pennsylvania and New York on small, dangerous, disease-prone sailing ships. Some worked of their contracts of servitude and homesteaded frontier farms; others started businesses and travelled throughout frontier America on horseback, stagecoach, wagons and riverboats. They and their children fought as Yankees in the Revolutionary War and on both the Union and Confederate sides of the Civil War. Later on, others served in World War I and II, the Korean War, and Vietnam. They became farmers, soldiers, businessmen and women, doctors, writers, artists, lawyers, teachers and ministers. It is, in short, a very personal history of America.
Toon meer Toon minder