Seven Stones An Anthology of the Wrecked Earth 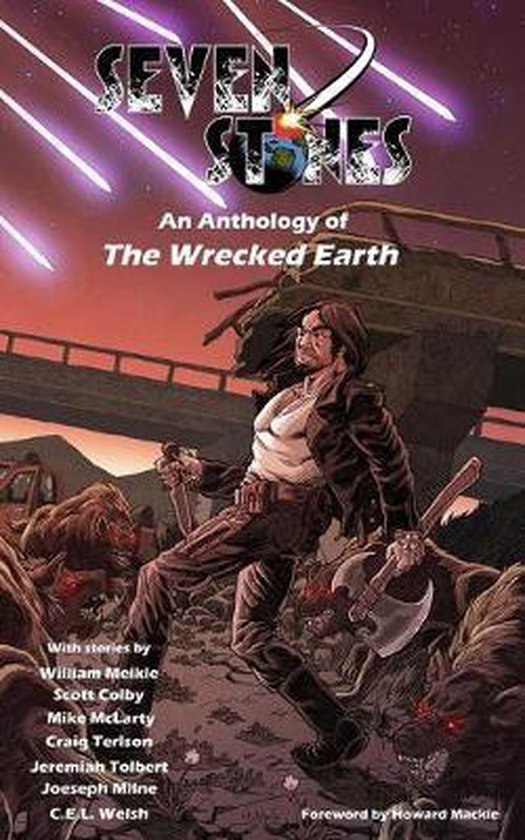 Seven Stones includes seven stories of The Wrecked Earth, the setting of C.E.L. Welsh’s CLUTCH and its sequels.The Wrecked Earth is our world... or it used to be until the meteors started falling. The devastation started with Rockfall and never stopped. Civilization was destroyed and now strange societies and loose bands of misfits struggle for power. Fallen meteors leak radiation, changing the landscape and what life remains. Herds of mutant animals roam the land and people struggle to survive. Seven writers were invited to create their own tale of a meteorite and how it affects the subject of their story.“Wrath of the Rat God” by C.E.L. WelshThis tale takes place years before the events of Book One of The Wrecked Earth and features a much younger Clutch. Just out of his teens, our wandering hero has seen more than his share of meteorites and their effects on the land and its creatures. Clutch has learned to trust his strong arm, steady aim, and sharp wits to survive. He must try something new when he takes a job to help a small-town despot get rid of his ''rat problem.''“Staying Alive Among the Beasts” by William Meikle What happens when a loyal zookeeper is faced with the prospect of sacrificing the animals he's cared for through the end of the world and beyond? Fred Atkins kept his animals alive through The Wrecking and everything that came after. Now he has to fend off a gang of hungry marauders, and the animals are only too happy to help him defend the zoo.“The Vale of Purity” by Jeremiah TolbertThis is the tale of the journey of a boy named Elija and his family as they follow the Jebediah, a so-called new prophet of God. Jebidiah and his followers have fled the ruins of Old Denver and travel through the dangerous lands of the Wrecked Earth in search of the promised land seen in a vision; the mythic Vale of Purity, untouched by mutants or meteors. Elijah wrestles with doubts about the true origins of Jebidiah's visions...until he recieves one of his own, a vision that may save his life.“Teddy's Treasure” by Craig TerlsonTheodore Limpdo has lived alone on the family farm ever since the stones dropped from the sky and beat everyone and everything all to hell. He likes the solitude and is getting tired of strangers dropping in on him to see if the rumors are true. Ever since word got out that Teddy had some hidden treasure on his land, more and more people are coming to see if they can dig it up--and maybe throw skinny Teddy in the leftover hole. Weird thing is, none of those folks are ever heard from again.“Hope and Desire” by Scott ColbyThe story of a pre-Wreck politician with delusions of glory who leads a gang of thugs and demands the citizens of a small settlement join up or ship out. With a month to make their decision, the villagers decide to pursue a desperate gamble; quarantine the loser of a lottery with a meteorite know to cause sudden, drastic changes in the hopes of finding a savior. Will the town's gamble pay off...and do they really want it to? “Shepherd's Choice” by Mike McLartyShepherd journey's once more into a small town to take the tithe, and once more the people try to resist him. Every year he must obey his masters and take hope from some to give hope to all, and every year he loses a little bit of his soul in the process. This time he is sorely tempted to break his unbroken record of success, but something about the tithe draws him in and convinces him that this time things will be different...“Land of the Blind, Sea of the Dead” by Joseph MilneRonin has a unique angle on the market, one that he hopes can keep him in rum and other delights for the rest of his life...however long that might be in a place like the Wrecked Earth. But can he hold on to his secret long enough to profit from it?
Toon meer Toon minder