Sitcom And 'German-Bashing' EBOOK Tooltip Ebooks kunnen worden gelezen op uw computer en op daarvoor geschikte e-readers. The representation of Germanness in the second season of the American sitcom Frasier with special regard to 'An Affair to Forget' 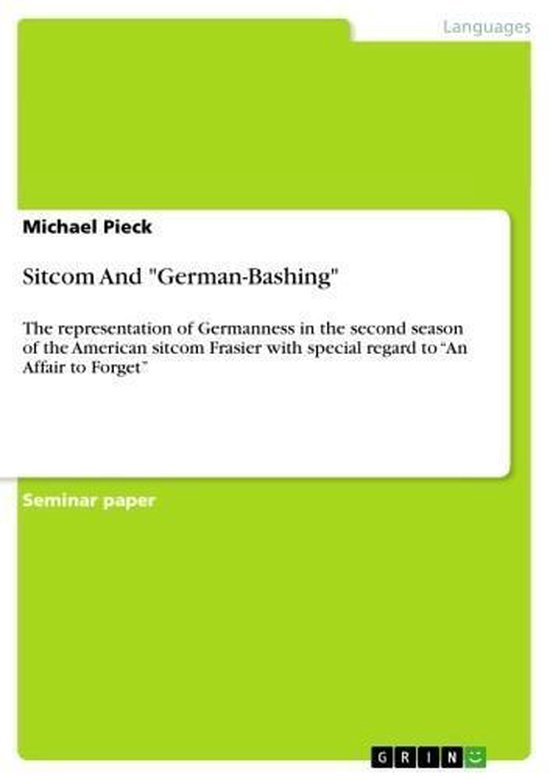 Seminar paper from the year 2011 in the subject English - Literature, Works, grade: 1,0, University of Cologne (Englisches Seminar), course: Sitcom and Violence - Einführungsseminar Literaturwissenschaft, language: English, abstract: Violence and its various forms of representation have been a recurring source of comedy and humour throughout the history of comedic literature. (...) As Schneider et al. have shown, violence can be interpersonal, collective, or even self-inflicted. Forms of violence can be both physical and non-physical. Whereas violence in its blunt physical or verbal appearance is usually easy to define and comprehend, this may not necessarily be the case with its non-physical and non-verbal forms. The mode in which characters or groups are represented within a narrative or a plot can be an effective form of violence, too, as Armstrong and Tennenhouse have proposed. A good example of how a national stereotype is ridiculed in a sitcom is the Emmy-awarded episode 'An Affair to Forget' from the sitcom Frasier aired in 1995. In this episode the protagonist Frasier believes that his brother's wife has an affair with her fencing instructor, who is German. This fencing instructor, named Gunnar, is portrayed in an assumed stereotypical way: He is blond and tall and he does not speak any English--although his wife does fluently. He seems to be hot-tempererd so that the accuse of having stolen a shoe (a misunderstanding) makes him attack Frasier's brother with his fence. It may be the depiction of Gunnar as an alleged typical German, as well as the representation of Germanness in general, which have prompted the producers of the German dubbing to change Gunnar and his wife's nationality from German to Danish in the German version of the episode. To a German audience this depiction of their own national stereotype may appear so grotesque that they would either not recognize themselves or even feel offended. In addition, the bigger part of the jokes in this episode, which rely on mutual not-understanding, would not work if the whole episode was presented in just one language, namely German. The question now arises whether such a depiction of a German stereotype is a deliberate disparagement of all Germans, and thus a representation of violence. Is it another form of German-bashing as it was popular among the British tabloid at the beginning of the millennium? This essay will examine the representation of German stereotypes in the American media in general and its depiction in the second season of Frasier in particular. It will present a short overview of the historical developments with special regard to the employment of German stereotypes in the United States.