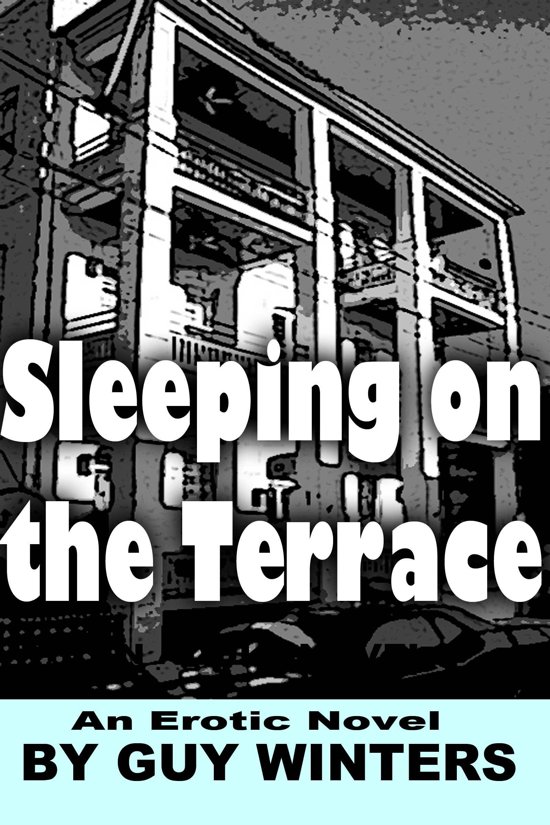 Here's an excerpt from Sleeping on the Terrace by Guy Winters.

"Hmm, very pretty," he thought admiring what he could see through his nearly closed eyes. He tried to keep as still as possible even when she inadvertently tickled him.

Once done, she picked up a pair of white sandals with four-inch heels and slowly slipped the shoes on his feet.

A few minutes later, Jason opened his eyes and glanced down to see his neighbor sitting cross-legged near his feet and grinning like a Cheshire cat.

He looked down at his feet and then to her. He grinned awkwardly and admired her work.

"Nice color," he mused as he raised his foot up to inspect his toes. "Nice shoes, too. I'm surprised that you had a pair that fit," he said sitting his feet on the terrace floor and starting to stand up. He walked casually to the terrace door that led into his apartment. He turned to see her still sitting on the floor with a look of shock on her face.

"What? I bet you expected me to stumble or fall didn't you?" His mouth curled into an impish grin then he turned and walked inside.

Totally surprised, she got up and followed him to the doorway.

"Want something cool to drink," he asked? "I think the afternoon sun is still warming up the place. Or perhaps it's just the nail polish?"

"You've worn heels before, haven't you?" she asked.

"Once or twice, but never in front of anyone else. You're the first. You can have water, iced tea, or a soda? You pick."

"Iced tea please," she replied, leaning against the doorframe. "You move well in them. They look very cute on you."

Jason filled up two glasses and walked back to sit by the couch in front of the television.

"Join me," he said, gesturing to her to sit on the couch as he sat on a chair nearby.

She took the glass he offered and sat tentatively on the couch sipping her tea. Jason glanced at her and he could see that curiosity was getting the best of her.

"Are you into cross-dressing?" she asked finally.

"You see that's what bugs me about the whole social construct. Women can wear pants and shirts and ties and it's not cross-dressing, it's considered cute or sexy. Men can't wear dresses or panties or high heels because it considered feminine and perverted. Therefore it's negatively referred to as cross-dressing, transvestitism, or what have you."

"Nice rant but you didn't answer my question."

"I know. I can't find an answer that suits me." He set his feet on the coffee table and crossed his ankles. Then he admired the sandals on his feet. ''These shoes do look nice don't they?''

She shook her head and chuckled. ''You are unique,'' she quipped with a wry smile.

''Not really. Just open-minded and unwilling to adhere to an antiquated concept of how men and women should or can behave." He paused a moment and looked at her with a big smile.


A PERSONAL NOTE FROM GUY WINTERS:

At present I seem to be exploring the often misunderstood world of the inter-sexed person. If you are unfamiliar with the term ''intersex'' Google it, you'll find it very complex and complicated. The Wikipedia entry is very thorough although my work should never be considered clinical. Other works that I plan on adding to my catalog will begin to explore other issues but right now the plight of the intersexed person stuck in a world of narrow-minded bigotry is something of interest to me. I hope you find them interesting as well.

I try to make my characters believable and the world they inhabit relatable (well I suppose a world that contains vampires is a bit of a stretch but that story was just a lot of fun to write).

If you have the chance, please review my work. Your feedback is invaluable to me as an author and I appreciate it very much.