So this then is Christmas eve 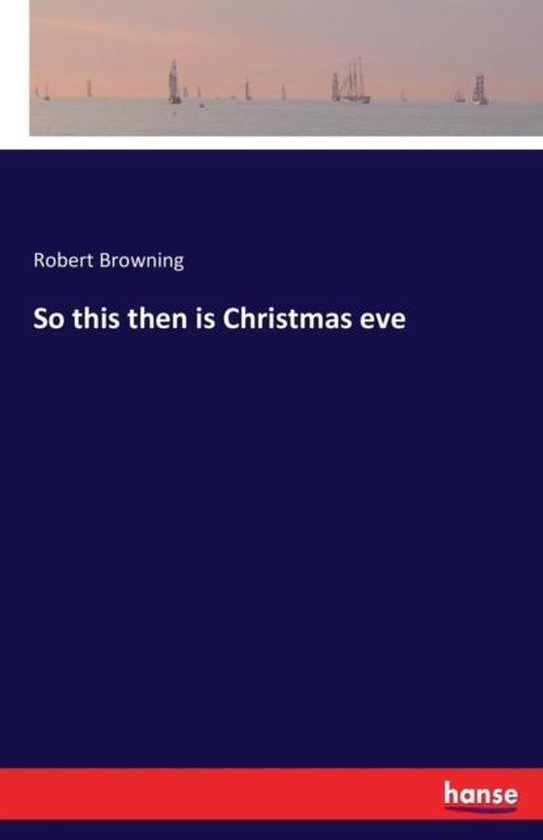 Robert Browning (1812-1889) attended the newly founded University of London for a year before travelling widely on the Continent in the 1830s and 1840s. After a clandestine courtship, he married Elizabeth Barrett in 1846 and they lived in Italy until her death in 1861. He is one of the most significant and inventive of Victorian poets.
Alles van Robert Browning
Toon meer Toon minder

From the INTRODUCTION.
WE find Robert Browning deeply religious, though he is never sanctimonious. Cant and ceremony, form without substance, anything that savors of falsity, is to his mind the unpardonable and death-dealing sin. At least, pure humor and true religiousness go hand in hand on this happy Christmas Eve, and is injured. The joyousness which bejewels everything at Christmas time sparkles all through the poem, as though the very angels had come from heaven to sing again with men. It is a very human song, and therefore a true one, handling with deepest insight the ludicrous, the unreal and the dishonest. It discovers the false as well as the true, first in the simple chapel service of the ignorant, next in the rainbow religion of the poet, and last in the emptiness of the rationalistic worship of a myth. It seeks and discovers the real, as the bee finds the honey.
The native intuitions of the human soul, the ''primal elements'' in man, are what Mr. Browning is always interested in and taking account of, whether found in the learned or the unlearned, in the rich or the poor. Wbatever is real, Adham, Adam, Man, hu-man, this is what always contains depths and heights of interest for him. What he deplores and ridicules most of all is the nullified man or woman, the inconsistent, the unnatural, the untrue.
''The soul, little else, is worth study,'' is a favorite quotation among Browning readers, taken from his introductory note to ''Sordello.'' In whatsoever condition the soul is, it is still his immortal theme. ''The Soul's Tragedy,'' to his mind, occurs, when all primal elements are filmed over by conventionalities, or by human wisdom, or by utilitarian considerations, until they have oozed away and no real personality is left. The fixedness of the soulless soul is what the author of ''Christmas Eve'' considers the most fearful and solemn death.
This poem is a narrative, and the narrator finds himself dodging a storm. He seeks to enter a little dissenting chapel, situated
Where the town's bad blood once slept corruptly.
He snuggles himself up as closely as he can in the little four-by-six porch which serves as a doorway. He becomes interested in the different specimens of human nature that hurriedly and drippingly crowd past him to enter the door, the inner door, whose latch ''grew more obstinate the more they fumbled.''
''From the road, the lanes, or the common'' they come ; the stout, weary woman panting for breath, as she claps her umbrella, ''a mere wreck of whale- bones,'' down beside him; then the patient little sister-turned-mother, carrying the sickly babe on her breast (its one warm place), who stops to wring dry the draggled ends of her shawl before she enters ; then the dingy satins of a female something— all that is left of a woman; the coughing boy, etc., all of which goes to make up one of Browning's wonderful life-pictures. ''Very realistic,'' I suppose it might be called; vulgar perhaps; but one thing we may know : only the closest observer of the workings of the human soul could ever see all that our hero saw in this chapel door.
Toon meer Toon minder