Some Modern French Writers A Study in Bergsonism 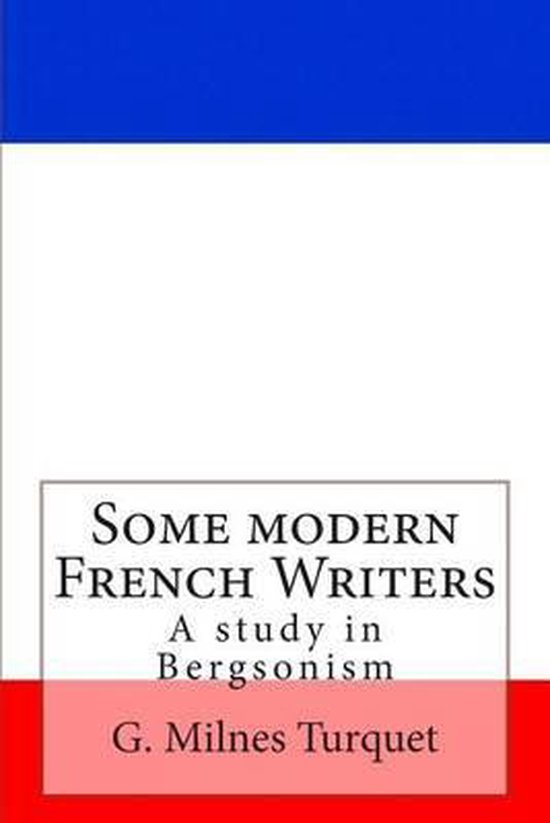 From the PREFACE.
THOSE critics who study the destiny of philosophical ideas for the ironical pleasure of seeing them work in exactly the opposite direction from that which their founders intended have not failed to remark that the two great movements of French thought since the 16th century — Calvinism and Cartesianism — developed states of mind utterly different from those Calvin and Descartes wished to create. Descartes would have been horrified to hear himself called the father of the French Revolution, and Calvin equally so at being called one of the founders of free thought.
It would seem, then, that in addition to the impetus given by a powerful writer, there is another and more powerful movement to which the first must conform, if it is to succeed. The fact is, that when we cut up society into slices, two important groups are soon discovered — the political and the literary, and the former always ends by absorbing the latter, except in the very rare case of a genius who is both legislative and poetical: Mahomet, for example. The Social aspirations of a people always manage to get themselves adopted in the end, and that for obvious reasons. Vox popttli, Vox Dei. The only doctrines which have a chance of surviving are those which in the course of time blend not only with the tendencies of the moment, but with the general spirit of a nation, nay, of mankind. A study of history shows us humanity's progress as one long, long journey towards an increasingly complete, ever-higher freedom. In truth. no spectacle is better calculated to rejoice the heart of the idealist, since humanity, in spite of stumbles and backslidings, succeeds little by little in freeing itself from its material and materialistic fetters, and in ushering in a reign of more justice, more happiness, more liberty.
In France, just before the outbreak of the war, we were looking on at a philosophic and literary movement which, in the width of responsive undulations it has produced in the world at large, may well be compared with the movement determined by Descartes. Greatly as we may esteem certain modern philosophers, it is no insult to them to say that it is M. Bergson who has the widest world reputation. Japan studies him with the same ardor as Sweden or America. Every year sees the roll of his disciples swelling in England. Attention to him and to his famous doctrine of la réalité qui se fait becomes more and more pronounced all over the world.
''What fate does the future hold in store for him? Only our grandchildren can answer that question. Still, it is permissible to foretell the future, or even, in the pragmatist's way, to make it.
If we questioned Bergson himself on this point, he would tell us that his doctrine, like every product of the human brain, is a progressive thing, by no means perfect nor complete nor absolute. I am only a man; therefore you must not ask me for more than I can give. I have merely tried to get into close touch with that nature which always eludes us. For the riches of nature are inexhaustible — things do not begin, nor do they end, nor are they as we see them, nor as we should wish them to be. We are placed in front of an admirable and beneficent fluid in which anything may happen, especially the unexpected; and philosophical systems can never be more than the mind's points of view, more or less correct, but really incomplete, in comparison with Reality, the Reality which we shall know some day. So that it would be a great mistake to ask of science the divine light to guide us through the reefs and shoals of existence, for the very good reason that life is not made for our intellect, but our intellect for life….
Toon meer Toon minder