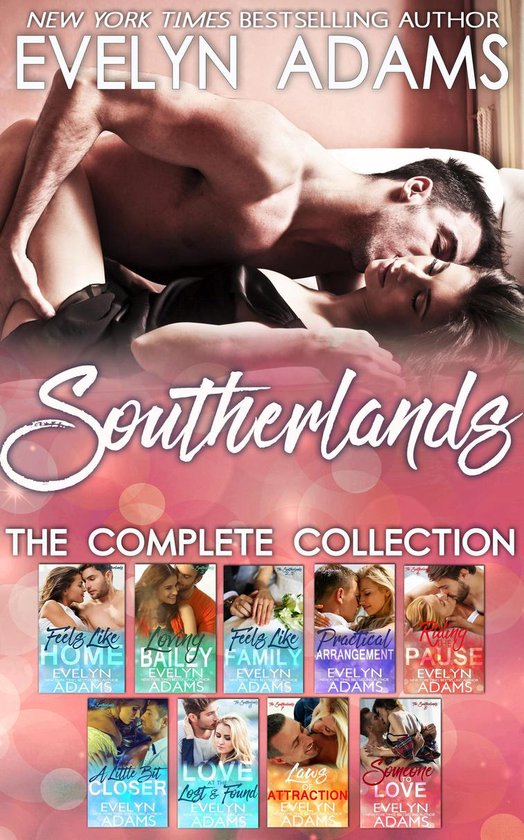 Fall in love with the Southerlands in this complete collection of all eight full length novels and a bonus novella!

No one knew what it cost her to come home.

With her career going down in flames and a family history that reads like a bad tabloid, Autumn Maddox can’t afford any more PR disasters if she wants to hold her head up in her old home town. So she’s going to do the impossible—smile brightly at every insincerely murmured “bless your heart,” ignore every not-so-subtle dig, and pretend the town’s sexiest bachelor is a eunuch. Well… two out of three isn’t bad, right?

The minute he lays eyes on her again, his life turns upside down.

Town doctor Jude Southerland is known for two things: saving lives and ducking marriage. So when he almost runs Autumn down in the middle of Main Street and ends up sipping sweet tea with the prodigal daughter a few weeks later, the good townsfolk take notice. As far as Jude’s concerned, the last woman anyone would pair him with is the only one he wants.

As far as Autumn and the town are concerned, this means war.

Jude’s determined to be her knight in shining armor, but Autumn gave up on happily ever afters, small southern towns, and herself a long time ago. What’s it going to take to convince the Ladies’ Auxiliary, the Rotary Club and the woman of his dreams that their love is meant to be?

Chef Bailey Southerland can’t get any satisfaction – at least not in the way that really matters. She’s got family and friends she adores and a promising career, but her love life is like a soufflé that never managed to rise. When the mouthwatering writer with his clear blue eyes and easy, open manner moves into the cottage down the hill, it looks like things might finally be going her way. She doesn’t need him to be Mr. Right, but he has all the makings of a fantastic Mr. Right Now.

Badly burned by love, Trace Campbell tried to convince himself he’s content being just friends with his gorgeous neighbor, Bailey. If he can’t get his hands on her at least he can sink them in the soil and grow the produce on his farm that she needs for her restaurant, spending time with her while keeping her at a safe distance. But strawberries are a poor substitute for mind-numbing kisses and when another man shows up and it’s obvious he’s interested in more than Bailey’s cooking, Trace has to dig his head out of the dirt and put his heart on the line or risk losing the woman he loves.

Town doctor, Jude Southerland asked Autumn Maddox to marry him and she said yes. The dress has been bought, the church reserved, and the band booked. Happily ever after here they come.

But when the couple gets an unexpected surprise, plans have to change, leaving the whole town wondering if they will make it to the altar on time.

Summer Maddox has had horrible luck when it comes to men. The only thing good to come out of it all is her daughter. Even though she feels guilty that her child doesn’t have a father figure in her life, Summer’s learned from her mistakes and won’t be repeating them

After three tours in Afghanistan, Travis Southerland has finally come home. His body is healing, but his heart still aches for his friends who died in combat. He doesn’t know if he’ll ever be whole, and the last thing he wants is to have someone depending on him for anything ever again.

After family events keep throwing them together, Travis and Summer can’t deny the spark between them. Neither of them are interested in a relationship, but a practical arrangement might solve both of their problems and get their families off their backs. And just because they aren’t looking for love doesn’t mean it won’t find them – if either of them is willing to take a chance.

Rachel Southerland’s life runs on a tight schedule. She’s never met a variable she couldn’t control and likes it that way. But when a job loss threatens her orderly world and her identity, she sets off on the Appalachian Trail to find peace in the Blue Ridge Mountains.

Ian Maxwell hasn’t worn a watch for years, waking with the sun and working all day in the forest he loves. On the surface his life seems unambitious, but still waters run deep, and Ian has secrets of his own.

When a chance meeting in the quiet shadow of the mountains throws them together, Ian tries to hold on to his calm and help Rachel find hers. But she hits his life like a hurricane, sending waves barreling through his peace. Can they work together to find something richer than either of them imagined or will what they thought they wanted keep them from seeing the love standing right in front of them?

Blake Southerland is tired. Building an empire is hard work and his meteoritic rise in wealth and power has come at a steep cost. He misses the family he’s always been close to, and although he has absolutely no desire to follow his siblings down the path to true love and happily ever after, he’s tired of Skyping into family events instead of showing up in person. He doesn’t need to fall in love; he needs a chance to find his center and the peace that comes from going home.

Samantha Braxton was raised as the only child of emotionally distant parents in a posh London neighborhood. Growing up, she had everything a child could want except the love and warmth she craves. When she has the opportunity to travel to Virginia with her outrageously sexy boss, she jumps at the chance to ditch her sheltered upbringing for a real adventure.

But will Blake’s big pushy loving family overwhelm or charm her and will the clash of their cultures be one more wedge between them or will the beautiful English rose help the jaded businessman find his way home?

LOVE AT THE LOST AND FOUND

Taylor Southerland is about to quit. Again. Architectural restoration is the most recent in a long line of careers that don’t fit. She wants something to feel passionate about and worries her inevitable job description might begin and end as someone’s wife. Before she can figure out her next move, she has to finish the job she was hired for, which means finding a way to work with the fast talking Yankee responsible for the metal work, who seems intent on planting his sexy broad shoulders and tattooed biceps in her path.

Welder and Jersey native, Matthew Thorne has enough on his plate completing the restoration work on his latest project. The last thing he needs is a spoiled Southern belle sticking her nose in his business. He just wants to finish the work he was hired to do, so he can get back on his bike and move on to the next job, especially when she’s a complication he doesn’t need. She might be smart, funny and sexy, but she’s also a major distraction – and distractions and blowtorches are a bad combination.

Taylor thinks he’s dangerous and Matthew’s sure she’s trouble, but it doesn’t stop things from heating up between them. With sparks flying, can they see past their misconceptions to find the truth buried under the rubble or are the biker and the belle destined to stay lost to each other?

Lawyer Andrew Coles needs a date for the next Southerland wedding, one who will keep the pitying looks at bay and make his favorite bridesmaid regret walking away from him. But most importantly one who doesn’t come with strings attached. He doesn’t need or want the complication of a romantic relationship.

When exotic dancer Candy Graham rear ends a pickup truck on the way to a new job and much needed cash, she knows she’s in trouble. Her totaled car puts a damper on her plans and plants her firmly on the wrong side of the law. She needs a lawyer fast and preferably one who can be flexible with payment.

A straightforward business arrangement solves both of their problems. He gets a wedding date with no hidden agenda, and she gets her legal problems to disappear. Perfect. Until a relationship of convenience turns into something neither can live without.

Adam Southerland is the last man standing. His brothers and sisters have all found true love, and he’s still alone. It’s not by choice – not entirely. He wants one special person to come home to at the end of the day, someone to build a family with, but his job as a cop doesn’t make it easy. Until a pint-sized graffiti artist leads him to the woman he’s been dreaming of and the family he’s always wanted. Except busting Erica Braxton’s son for vandalism isn’t a great start.

After her husband died in Afghanistan, widowing her and leaving her young son without a father, Erica had to figure out how to pick up the pieces and rebuild her shattered life. She’s finding a path through her grief, but her son gets angrier and more self-destructive every day. The one ray of hope is the sexy detective who’s so good for her boy and so dangerous to her heart.

Erica and her son need a man in their lives and Adam wants the job. But she’s not falling for a guy who carries a gun. If she gives her heart away, it will be to a nice safe accountant or insurance salesman. With crime in the normally quiet town heating up and Erica walling her already wounded heart away, can Adam convince her to take a chance on them? Or will he be left alone again without someone to love?

New York Times and USA Today bestselling author Evelyn Adams invites you to fall in love with the Southerlands. Love is just a click away.