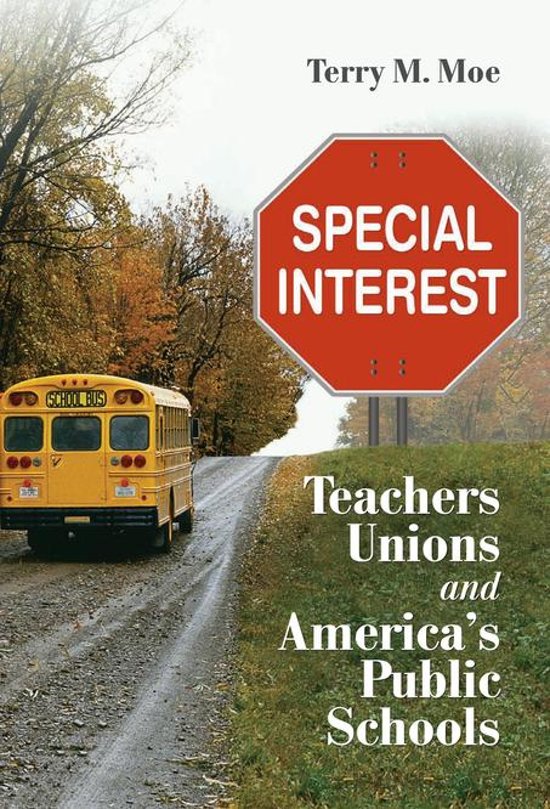 Why are America's public schools falling so short of the mark in educating the nation's children? Why are they organized in ineffective ways that fly in the face of common sense, to the point that it is virtually impossible to get even the worst teachers out of the classroom? And why, after more than a quarter century of costly education reform, have the schools proven so resistant to change and so difficult to improve?


In this path-breaking book, Terry M. Moe demonstrates that the answers to these questions have a great deal to do with teachers unions-which are by far the most powerful forces in American education and use their power to promote their own special interests at the expense of what is best for kids.


Despite their importance, the teachers unions have barely been studied. Special Interest fills that gap with an extraordinary analysis that is at once brilliant and kaleidoscopic-shedding new light on their historical rise to power, the organizational foundations of that power, the ways it is exercised in collective bargaining and politics, and its vast consequences for American education. The bottom line is simple but devastating: as long as the teachers unions remain powerful, the nation's schools will never be organized to provide kids with the most effective education possible.


Moe sees light at the end of the tunnel, however, due to two major transformations. One is political, the other technological, and the combination is destined to weaken the unions considerably in the coming years-loosening their special-interest grip and opening up a new era in which America's schools can finally be organized in the best interests of children.

An exquisitely researched, compellingly reasoned treatise on the role of teachers unions and their impact on America's schools. Terry Moe has read everything, collected mountains of data, and thought more deeply on this topic than anyone in America. Special Interest immediately becomes essential reading for policymakers, would-be reformers, and anyone concerned about the future of American education. --Frederick Hess, American Enterprise Institute America's public schools are broken, and Terry Moe sets out to explain why. In a bare-knuckled and brilliant account, he shows how the teachers unions use their unmatched political power to control virtually every aspect of educational policy and practice. The result, not surprisingly, is a system that protects the interests of employees at the expense of our kids. --Joel Klein, CEO, News Corp Education Division, and former chancellor of New York City Public Schools This is a superb and historic book. Terry Moe, the first scholar to brave unions' wrath by revealing how they operate, now also shows how their dominance of public education will wane, due to political change and productivity-enhancing technology. Reformers, foundation heads, elected officials who have up to now been afraid to cross the unions, and union leaders and their allies should read this book as soon as they can get their hands on it. --Paul Hill, University of Washington Anyone who wants to understand education reform and its challenges should read this extraordinary book. Over the past few decades, teachers unions have become some of the most powerful actors in American public education. Terry Moe fills a crucial gap by exploring how the unions work; how they veto important reforms in ways that are detrimental for children; and how their power might be waning. As with his prior work, this book will make a tremendous difference in how we run our schools. --Michelle Rhee, former Chancellor, District of Columbia Public Schools, reviewing a previous edition or volume Special Interest constitutes the most serious and sustained inquiry into teachers unions ever conducted. It has the signature markings of Moe's scholarship: impeccable writing, clear and persuasive argumentation, sound empirics, and an utter unwillingness to pull any punches. In the ongoing debate about teacher unions and school reform, this book is a game changer. --William Howell, University of Chicago Moe shines a bright light on perhaps the most under-researched topic in all of education policy. This is a theoretical and empirical tour de force, revealing what makes the teachers unions tick and why they are absolutely central to any discussions of education reform. Along the way, it makes a persuasive case that the unions are often misunderstood, even by seasoned observers --and that this is encouraged by a rational union strategy. Moe's perspective on union power is bleak, laying bare its iron grip on the schools, but he offers hope that we are entering a special time that allows for significant change. --Eric Hanushek, author of Schoolhouses, Courthouses, and Statehouses
Toon meer Toon minder