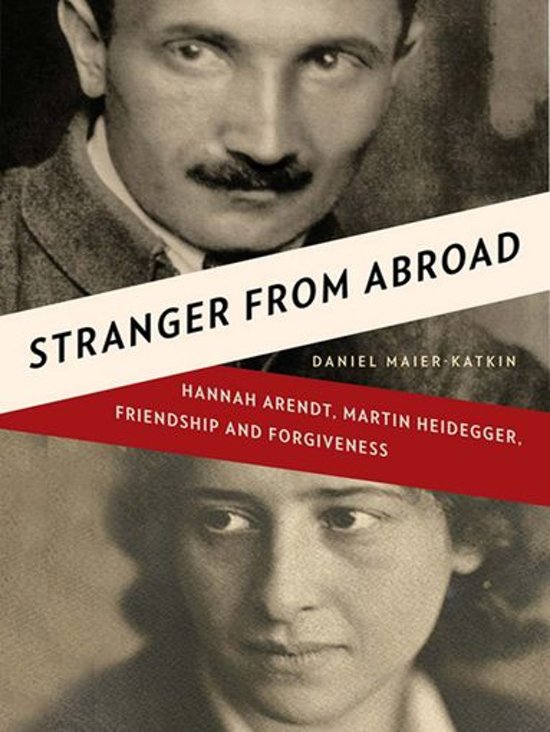 
Shaking up the content and method by which generations of students had studied Western philosophy, Martin Heidegger sought to ennoble man's existence in relation to death. Yet in a time of crisis, he sought personal advancement, becoming the most prominent German intellectual to join the Nazis.


Hannah Arendt, his brilliant, beautiful student and young lover, sought to enable a decent society of human beings in relation to one other. She was courageous in the time of crisis. Years later, she was even able to meet Heidegger once again on common ground and to find in his past behavior an insight into Nazism that would influence her reflections on "the banality of evil"—a concept that remains bitterly controversial and profoundly influential to this day.


But how could Arendt have renewed her friendship with Heidegger? And how has this relationship affected her reputation as a cultural critic? In Stranger from Abroad, Daniel Maier-Katkin offers a compassionate portrait that provides much-needed insight into this relationship.


Maier-Katkin creates a detailed and riveting portrait of Arendt's rich intellectual and emotional life, shedding light on the unique bond she shared with her second husband, Heinrich Blücher, and on her friendships with Mary McCarthy, W. H. Auden, Karl Jaspers, and Randall Jarrell—all fascinating figures in their own right. An elegant, accessible introduction to Arendt's life and work, Stranger from Abroad makes a powerful and hopeful case for the lasting relevance of Arendt's thought.

Dan Maier-Katkin has written a uniquely fascinating book that manages to capture the passions and intellectual complexity of a relationship but also the complexity of the world and events surrounding that relationship. I was profoundly moved by the book. It is rare that an author can care so intensely about a subject and yet have enough distance to write about it so well. I loved the book and can't recommend it highly enough. -- Jeff VanderMeer, author of of Booklife It's one thing to study the ideological debates that so traumatized twentieth century Europe, and quite another to explore them on a painfully human scale. Through the interlocking lives of two enormously influential individuals, Maier-Katkin's book illuminates the intellectual and moral struggles of the era. The book is at once impressive in its breadth of historical vision, and richly textured in its psychological portraits. -- Philip Jenkins, author of Jesus Wars A useful counterpoint to the recent debates about Heidegger's relationship to Nazi ideology, and whether [Arendt's] admiration for Heidegger informed her thinking about the Holocaust and her formulation of the 'banality of evil.' -- Ronald Florence, author of Emissary of the Doomed An excellent introduction to the story of one of the most dramatic and fascinating relationships of the twentieth century. -- Vivian Gornick, author of The Men in my Life Few relationships are more mysterious than that between Arendt and Heidegger. More interesting than their brief love affair when she was his young student is the attitude she took toward him in her maturity. Despite his Nazi affiliation, she refused to write him out of her life and out of intellectual history. This is a humane, judicious, and utterly absorbing account of Heidegger's role in Arendt's life and thought. -- Rebecca Newberger Goldstein, author of Betraying Spinoza Heidegger's personal and political opportunism, and Arendt's struggles to be what she would consider fair in her dealings with all are made accessible to popular readers in this version of their joint and separate lives. -- Library Journal The author is an advocate for both Heidegger and Arendt-though he is far harder on the former, calling the philosopher's actions 'shameful'-and he provides a lengthy defense of Arendt's most controversial work, Eichmann in Jerusalem (1963), and its analysis of what she called 'the banality of evil,' a phrase that continues to foment fiery debate nearly a half-century later. -- Kirkus Reviews [A] fascinating snapshot of the divergent ways two towering intellects responded to the 20th century's darkest moments. -- Publishers Weekly Starred Review. Readers welcoming diverse perspectives will benefit from this inquiry into a relationship uniquely freighted with historical meaning. -- Booklist
Toon meer Toon minder