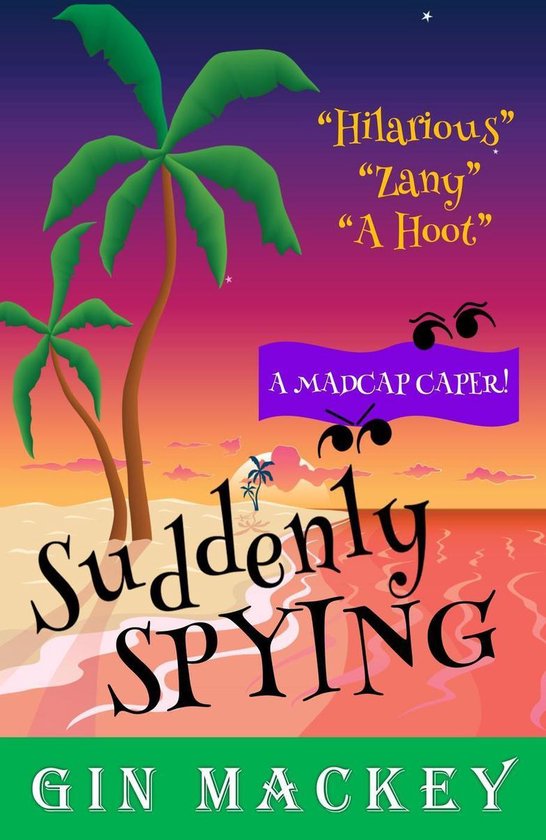 
Nora Gallagher’s never measured up to her super successful secret agent sister Giselle. Then Giselle arrives home unexpectedly—hot boytoy Jesse in tow—dangling a big bucks spy assignment and promising to help Nora learn the spy business. Nora forgets about the time Giselle gave her a bouillon cube and told her it was a caramel.

Just short of shanghaied to tropical Barlanadana Island, Nora gets her assignment. Stop a coup financed by dangerous drug dealer Tommy the Twitch. But Giselle is weirdly jumpy, and spending lots more time in local bars than helping Nora learn the ropes. Nora desperately needs information from Tommy about the planned coup, and fast, if she’s to stop it before it starts.

Nora’s on her own. She stuffs herself into a man-eater dress, speed-reads MOAN magazine for tips, and seduces Tommy. On his boat, the Greasy Palm, he’s surprisingly open about his plot to take over the island. Does he feel immune from the law? Or is he going to have sex with her and feed her to the sharks?

When Nora’s cover is blown, she finds out Giselle forgot to mention something kinda important. Tommy’s twitch? It’s in his trigger finger. And he’s shooting at her. And everything else, for that matter.

That’s just the beginning of a pell-mell downward slide. Nora discovers Giselle lied like a Pinocchio-wannabe, and that she and Jesse aren’t exactly who they say they are. As a Bermuda-triangle of troubles threatens to suck Nora under, she’ll have to morph from low-achiever to agent extraordinaire, using skills she never knew she had in ways she never imagined possible if she’s to stop a coup, save her sister, and revive her own dying dreams.

With a little help from her new friend Jesse—who she hopes is falling for her the way she’s falling for him—she’ll stop the bad guys.