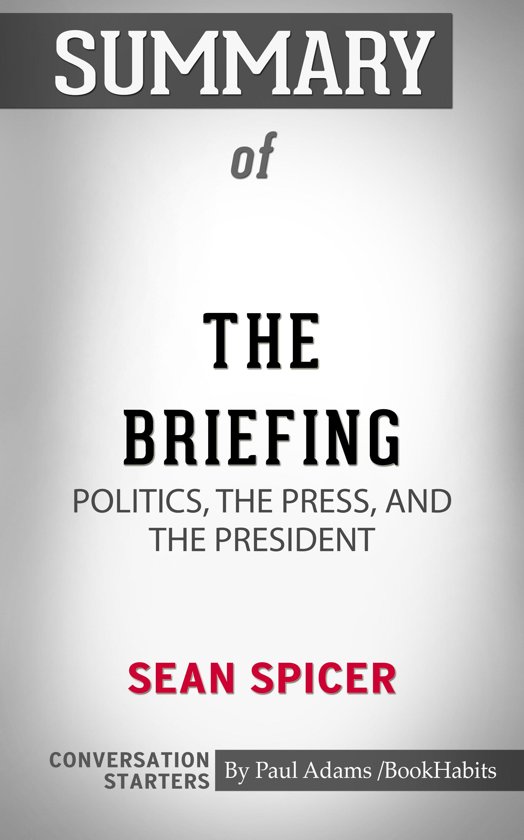 **The Briefing: Politics, The Press, and The President by Sean Spicer: Conversation Starters **


The Briefing author Sean Spicer has been a political insider for more than two decades. He has been an esteemed campaign strategist who received the call of a lifetime in December of 2016. The newly-elected President Donald Trump had selected him to be the new press secretary of the White House. His life was forever changed. When he accepted the call, Spicer was not a household name but when he walked into the brightly-lit briefing room, he was instantly before everyone's scrutiny. Every word from his lips is criticized. Every move that he makes becomes a parody. Every detail about him gets turned into a meme. This became his public life. Behind the scenes, things get as difficult as they do in the briefing room. Leaks from the White House frustrate him and the President. There was an extraordinary pressure on his family and his personal faith. In this moving political memoir, Spicer reveals the truth that the briefing room has not heard of. He offers a glimpse of one of the iconic podium in the White House, the press secretary.


Wall Street Journal is not fond of Spicer's memoir and said that it is "much like his tenure as press secretary: short, littered with inaccuracies and offering up one consistent theme: Mr. Trump can do no wrong." Washington Post gave a negative feedback on Spicer's book and said that it is not a political memoir nor a work of history. They said that it suffered a disconnect because he failed to "acknowledg[e] some fault in the boss."


A Brief Look Inside:


than the surface of its pages. The characters and their world come alive,


and the characters and its world still live on.


Conversation Starters is peppered with questions designed to


bring us beneath the surface of the page


and invite us into the world that lives on.


These questions can be used to create hours of conversation:


• Foster a deeper understanding of the book


• Promote an atmosphere of discussion for groups


• Assist in the study of the book, either individually or corporately


• Explore unseen realms of the book as never seen before


Read it on your PC, Mac, iOS or Android smartphone, tablet devices.