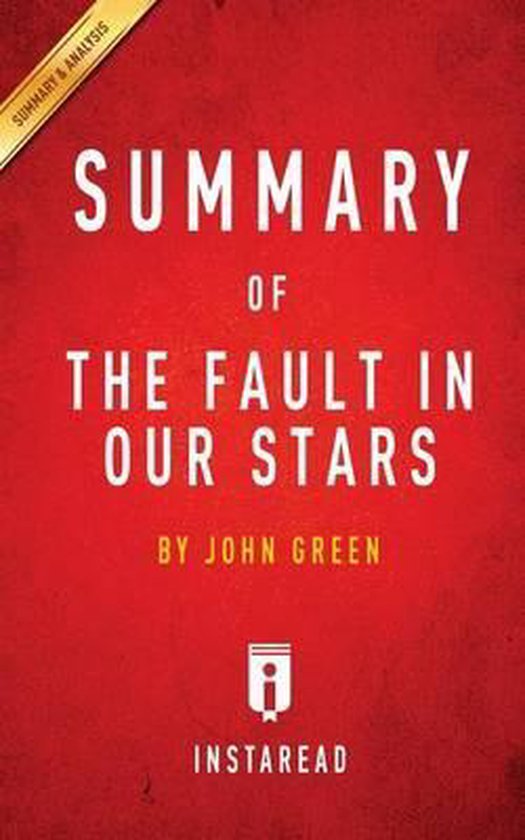 PLEASE NOTE: This is a summary of the book and NOT the original book.

The Fault in Our Stars: A 30-minute Summary of the John Green Novel

Hazel Grace Lancaster has thyroid cancer that has metastasized into her lungs. The tumors are no longer growing because of an experimental drug, but she will never fully recover. Hazel is watching television when her mother makes her get up and go to her cancer support group. Hazel dislikes the group, but her mother makes her attend because she thinks she needs to socialize more. She arrives just before the group begins. Isaac, her friend, talks about the surgery he will have a in a few weeks. He had cancer in one eye and that eye was removed. However, the cancer is now in his other eye and he will have to have that eye removed, as well. As added support, Isaac brought his friend, Augustus Waters, to the support group. Augustus, a very good looking young man, is also a cancer survivor. He had osteosarcoma that required the removal of his leg.

After support group, Hazel and Augustus wait outside for her mother. Isaac is with his girlfriend, Monica, making out on the far side of the church. Augustus asks Hazel to come to his house to watch V for Vendetta with him. He thinks she looks like Natalie Portman as she was in that movie. However, Hazel refuses when Augustus pops a cigarette into his mouth until he tells her that it is just a metaphor. She finds it so amusing, the irony of putting something that causes cancer into this mouth but not giving it the power to cause cancer, that she agrees to go to his home.

Augustus is a terrible driver because he cannot feel the gas pedal under his fake leg. Hazel makes him admit the only reason he has a driver’s license is because the examiner felt sorry for him. She calls it a Cancer Perk. They share their cancer stories. At Augustus’ house, Hazel meets his parents. Then they go downstairs to his bedroom. Augustus tells Hazel that he used to play basketball, but before he was diagnosed he realized it was pointless, the act of constantly throwing a ball into a basket. Then he asks her what she likes to do. She tells him about her favorite book, An Imperial Affliction. He agrees to read it if she will read his favorite book, the Price of Dawn.

Augustus and Hazel go into the living room to watch the movie. Hazel thinks the movie is a guy-thing. Augustus drives her home and asks her to call him later. She promises to call when she finishes the book....
Toon meer Toon minder