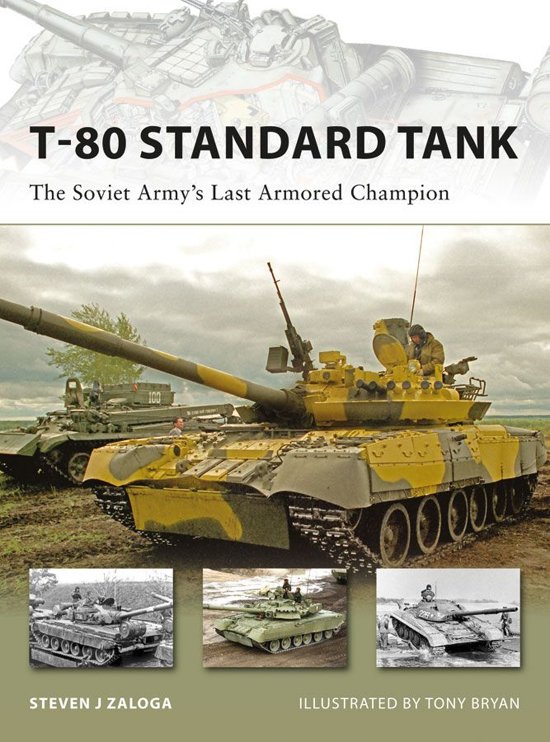 The Soviet T-80 Standard Tank was the last tank fielded before the Soviet collapse, and the most controversial. Despite having the most sophisticated fire controls and multi-layer armor ever fielded on a Soviet tank, its turbine power plant (rather than a conventional diesel) remained a source of considerable trouble throughout its career. Steven J Zaloga charts the little-known history of the T-80, covering the initial construction, through the development to the subsequent variants, the T-84 and Russia's enigmatic "Black Eagle Tank." Accompanying detailed cut-away artwork illustrates the unusual design features that made the T-80 so controversial.

The book is full of photos and illustrations, mostly in color, that again, will make this a much-used modeler's book... If your interest includes modern Soviet/Russian armor, I highly recommend this book to you... This volume gives you a developmental history that is easy to read and understand, plus the many photos and illustrations chosen with the modeler in mind, make this a very valuable asset to every modelers library. --Howie Belkin, IPMS/USA Steven J Zaloga's T-80 Standard Tank: The Soviet Army's Last Armored Champion offers a narrowed focus for speciality military collections focusing on military equipment. The T-80 was the last tank fielded before the collapse of the Soviet Union -- and the most controversial. Its history is revealed with photos and discussion. --California Bookwatch (April 2009)