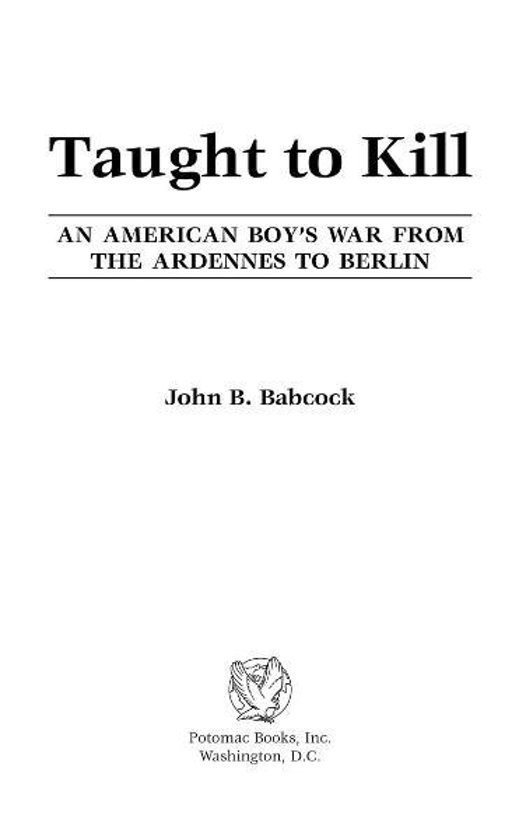 By mid-1944, the U.S. Army was facing a critical shortage of the most important commodity in any war, the common foot soldier. Higher-than-expected casualties during the liberation of France had forced the Army to comb its ranks for replacement infantrymen. Plucked in 1944 from the safety and privilege of the Army Specialized Training Program (the World War II version of the college deferment of the Vietnam years), twenty-two-year-old John Babcock suddenly found himself an infantry private headed to Europe. Raised in an upper-middle-class family, this sensitive and literate youth was thrust into a group of coarse, uneducated, and sometimes brutal draftees who were headed to the 78th Infantry Division as replacements. Babcock demonstrates that the ôgreatest generationö was not always that. Instead, it was like any other cohortùfull of liars, cowards, and ordinary men who simply wanted to stay alive and go home.

Babcock lets us see the war through his eyesùjust over the rim of the foxhole. Undergoing his baptism of fire in the Battle of the Bulge, he endures the trials of combat, advancing through attrition to become the senior sergeant in the company. This ordinary enlisted infantryman in ôjust another combat divisionö takes the reader from infantry basic training and seven months of combat to postwar occupation duty in Germany and back home. It is one infantry riflemanÆs story rather than an account of how his division fit into the grander scheme of the war in Europeùthough the author relates to that by providing the reader with a roadmap of dates and locations taken. Babcock offers an intimate taste of combat, casualties, how he fought, and with which weapons (in clear ôcivilianö language), and both the heroism and cowardice of his fellow soldiers. Published in cooperation with the Association of the United States Army, it is a gripping account of how an ordinary American boy felt and experienced the so-called good war.

A memoir that is compelling, authentic, and deeply human. --From the forword by Rick Atkinson, author of AN ARMY AT DAWN

Originele Titel
Taught to Kill: An American Boy's War from the Ardennes to Berlin