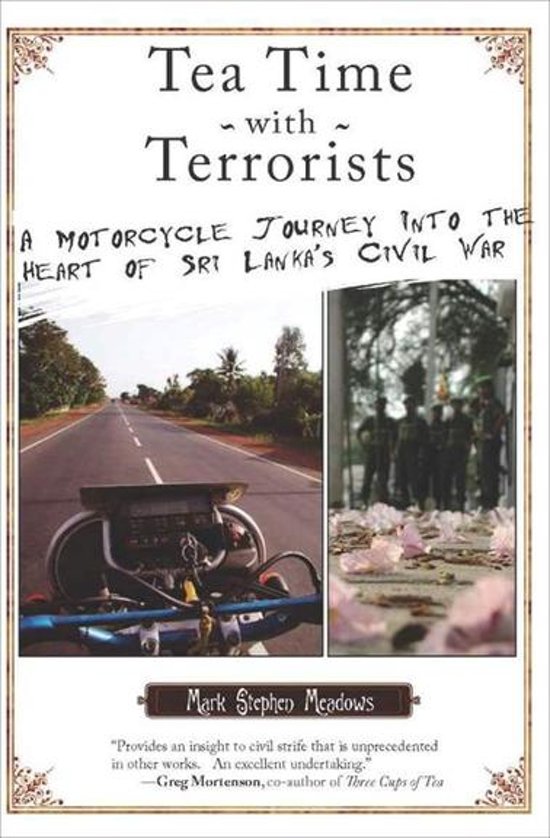 A journalist's travelogue of war-torn Sri Lanka "brings refreshing clarity and enlightenment" to our understanding of terrorism (Robert Young Pelton).

Armed with a map and a motorcycle, Mark Stephen Meadows ventures to Sri Lanka's war zone to interview terrorists, generals, and heroin dealers on their own terms. He seeks only to understand the conflict and witness the civil war's effects on the country. As he travels north through Colombo, Kandy, and the damaged city of Jaffna, Meadows discovers an island of beauty and abundance ground down by three decades of war. He is invited into an ancient culture where he learns to trap an elephant, weave rope from coconut husks, cast out devils, and even have afternoon tea with terrorists.

Meadow's story and take on the war focuses on the interconnectedness of globalization, the media, and modern terrorism in what Greg Mortenson, author of Three Cups of Tea, calls "an excellent undertaking."

Advance Praise for Tea Time with Terrorists Meadows' courage and the personal relationships he builds with the people he meets in Sri Lanka reveals the extent to which our fears are only a sign of how much we still need to learn. His warm approach and bridge-building provides an insight to civil strife that is unprecedented in other works. An excellent undertaking. --Greg Mortenson, Three Cups of Tea 'I went because knowledge is terror's strongest antidote,' Mark Stephen Meadows writes near the start of his book, and he achieves this goal well. Tea Time grants knowledge not just about Sri Lanka, but about terrorism, its genesis--a deadly serious subject, but all told in a voice as familiar as an old friend's. --Peter Allison, author of Whatever You Do, Don't Run: True Tales of a Botswana Safari Guide and Don't Look Behind You!: A Safari Guide's Encounters with Ravenous Lions, Stampeding Elephants, and Lovesick Rhinos Meadows's journey along the razor's edge brings refreshing clarity and enlightenment. He lets you feel, smell, taste and touch Sri Lanka in its moment of tumult. A great read for those seeking more than news reports and academic analysis. Highly recommended. --Robert Young Pelton, author of The World's Most Dangerous Places and Licensed to Kill
Toon meer Toon minder