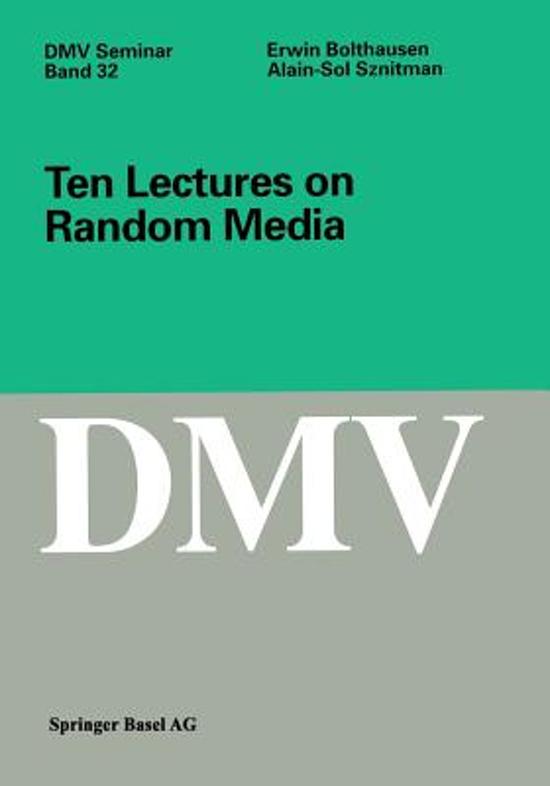 The following notes grew out oflectures held during the DMV-Seminar on Random Media in November 1999 at the Mathematics Research Institute of Oberwolfach, and in February-March 2000 at the Ecole Normale Superieure in Paris. In both places the atmosphere was very friendly and stimulating. The positive response of the audience was encouragement enough to write up these notes. I hope they will carryover the enjoyment of the live lectures. I whole heartedly wish to thank Profs. Matthias Kreck and Jean-Franc;ois Le Gall who were respon­ sible for these two very enjoyable visits, Laurent Miclo for his comments on an earlier version of these notes, and last but not least Erwin Bolthausen who was my accomplice during the DMV-Seminar. A Brief Introduction The main theme of this series of lectures are "Random motions in random me­ dia". The subject gathers a variety of probabilistic models often originated from physical sciences such as solid state physics, physical chemistry, oceanography, biophysics . . . , in which typically some diffusion mechanism takes place in an inho­ mogeneous medium. Randomness appears at two levels. It comes in the description of the motion of the particle diffusing in the medium, this is a rather traditional point of view for probability theory; but it also comes in the very description of the medium in which the diffusion takes place.
Toon meer Toon minder