The 13 Satanic Bloodlines Paving the Road to Hell: The End of Individual Choice is at Hand - Worldwide Evil and Misery - The Antichrist - Salvation 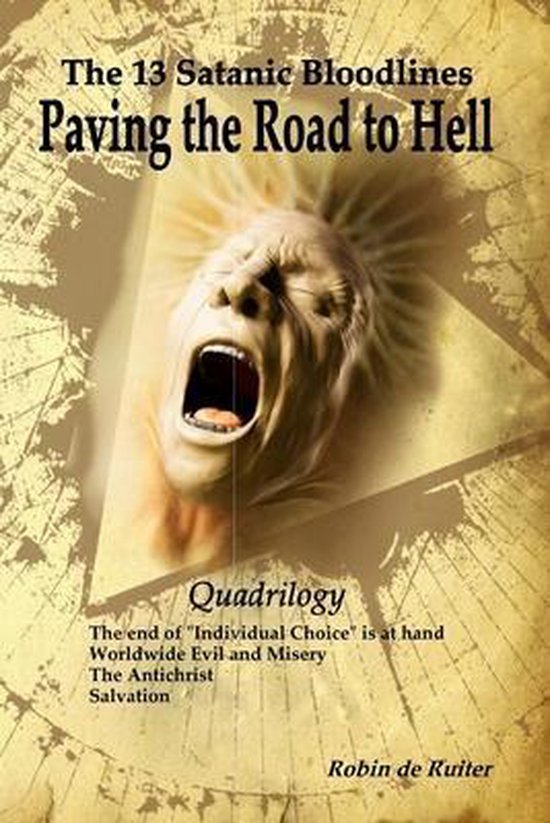 A WORLD WAR IS IN THE MAKINGNew Updated 2018 EditionThe first edition of this book was banned in France. This four-volume book is different from other books on the topic. It was written long before others started championing the need for the masses to wake up to the New World Order agenda. The first edition did not claim to be into futurism. However, a retrospective view of the events of the last twenty-five years shows that practically all topics mentioned in the book have come to fruition, often in an awesome manner.Like the first edition, this new updated edition is a very unique publication and reading it will undoubtedly change the way you look at both history and the world today. It completely turns everything on its head. Once you read it, all of a sudden you will see the world around you in infrared. You soon see things which are simply not possible to view with the range of standard vision.The contents of this book is highly controversial and uncompromising. It describes a monster that we, in all our ignorance, have created together. It also serves to give us an idea of what's in store for the near future, so we can better prepare for what's coming our way.UR-LODGESWe are raised, by tradition, to trust our governments, and are convinced that they care about us. This, however, is a big mistake. Below the surface of official politics lies a complicated social and intellectual process that is taking place. The visible world leaders are mere puppets directed by an invisible power from behind the scenes. This geo-political power consists of the richest families on this planet. The true aim of this elite group is complete control of Planet Earth. Together with the most powerful multinationals, they rule and control most countries and coalitions. Behind the scenes there are various hidden transnational Ur-Lodges under the supervision of the ruling elite of which even high-grade Freemasons have no knowledge. Not only high politicians from the United States, Russia and Western Europe, but also from Israel, Iran, Turkey, Saudi Arabia, Qatar and many other countries are members of these hidden Freemason-Lodges. They are all marionettes whose strings are pulled by our invisible leaders. Although political leaders on the world stage play opposite roles, behind the scenes they pursue the same goal: a technocratic world dictatorship. Anyone who aspires to pursue a career in politics to reach the top must become part of one of the Super-Lodges. Raising the political ladder is impossible without being part of one or more of these Lodges.In the Ur-Lodges, our political leaders meet regularly with media moguls, bankers, industrialists and personalities to coordinate and execute the policy of the ruling class.A world war that has to lead to a world dictatorship is in the making. Terror attacks play an important role in this regard. Some eminent ''Masonic Grandmasters'' do not agree any longer. The whistleblowers, including Zbigniew Brzezinski (White House Foreign Policy Expert) sound the alarm. Among other things, they declare that the leaders of al-Qaeda and ISIS are also members of the Ur-Lodges.Terrorists, politicians and other personalities are all Freemason brothers and conspire with the ultimate objective to have complete control over the world. This sheds a completely different light on the wars in Iraq and Syria, the millions of refugees flooding Europe and the global terrorist attacks. Anyone who believes that Muslims are guilty of the terrorist attacks must revise his view.IMPORTANT TO UNDERSTAND: RELIGIOUS DOGMA OF THE ELITEIt might surprise you that the ruling elite of this world consider Lucifer to be their only and true god; that one day he will openly rule this world.As long as our global elite believes that Lucifers ultimate goal is establishing a dictatorial world power, everybody on earth will experience the daily consequences of this.ALSO IN SPANISH, GERMAN, FRENCH, others
Toon meer Toon minder