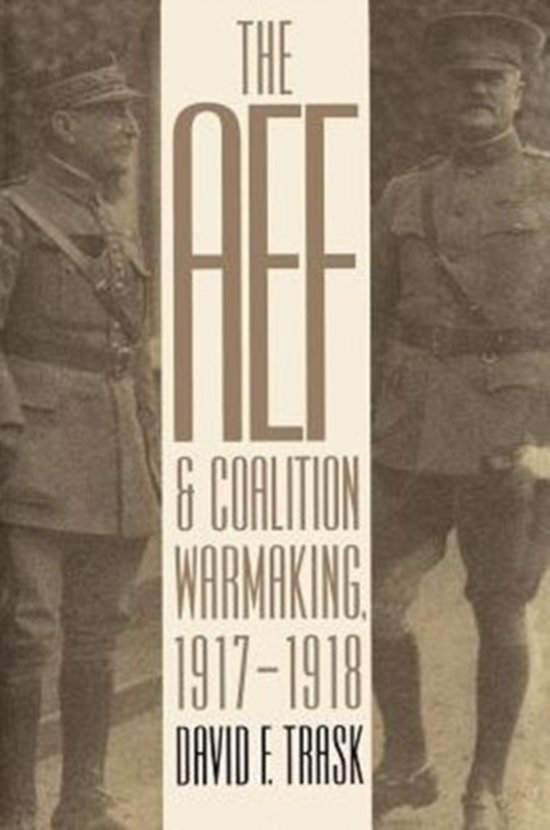 Underscoring an emerging revisionist view of the American Expeditionary Forces, David Trask argues that the performances of the AEF and General John J. Pershing were much more flawed than conventional accounts have suggested. This can best be seen, he shows, by analyzing coalition warfare at the level of grand tactics i.e., campaign military operations. The AEF didn't perform well in France, Trask contends, because it was committed as an independent force before it had time to train and gain experience. President Wilson and General Pershing's initial insistence on an independent American force rather than an integration with existing French and British armies resulted in costly delays and bitter victories in the decisive Allied counteroffensives against Ludendorff and the Central Powers. Using a tactic uncommon in previous studies of the AEF, David Trask views the campaign of 1918 through the eyes of the highest-ranking of field commanders, including Pershing, Marshal Ferdinand Foch of the Allied and Associated Powers, and General Erich Ludendorff of the Central Powers. Trask's portrayal of Pershing reveals a self-righteous leader who was unwilling to correct initial misconceptions that marred the doctrine and training of the AEF. Consequently, Trask demonstrates, Pershing's stormy relations with Allied military and civilian leader seriously undermined the AEF and its efforts to conduct coalition warfare.
Toon meer Toon minder

No practicing American historian excels David Trask in the combined mastery of the diplomatic and the military aspects of warfare. He provides the most cogent assessment available of the enigmatic American commander, General John J. Pershing. --Russell F. Weigley, author of The American Way of War An impressive work which is essential to an understanding of military and diplomatic coalition policies during and particularly after the close of World War I. --Betty Miller Unterberger, author of The United States, Revolution, Russia, and the Rise of Czechoslovakia One of the finest analyses of American participation in World War I. By carefully examining the documents, Trask has produced an outstanding book that sheds welcome light on the AEF and its commander. --Infantry This stimulating volume should arouse new interest both in American operations in France in 1918 and also in the perennially relevant issue of the problems of coalition warfare. --Journal of American History David Trask has focussed primarily on the operational dimension of Pershing's war. In doing so he has produced the best volume we have on the topic. It will be read with enjoyment as well as profit by everyone with a serious interest in the American army and the Great War. --Journal of American History Trask's work on the AEF adds in a significant way to the necessary questioning of American military and diplomatic history in the twentieth century. --Reviews in American History Trask's exhaustive scholarship and judgmental reasoning are of great value to historians; the lessons derived by him are of import to political and military leaders committed, now and in the future, to coalition military operations. --War in History Overall, Trask has firmly grasped the nettle, and placed the operations of the AEF in their proper perspective in 1918. In so doing, he has revised the beliefs of an earlier generation of AEF historians, and thus produced a valuable book. --Intelligence and National Security
Toon meer Toon minder