The Alpine Path The Story of My Career 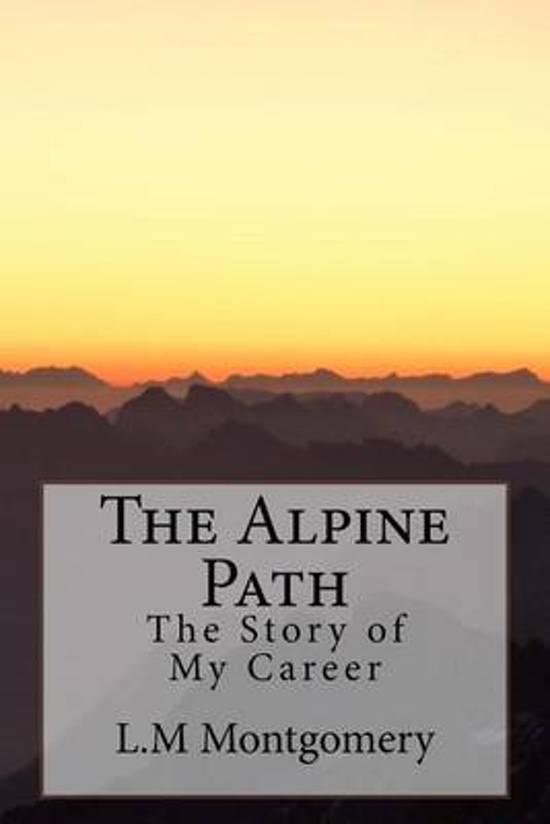 L.M. Montgomery OBE (November 30, 1874  April 24, 1942), was the pen name of Lucy Maud Montgomery, a Canadian author best known for a series of novels beginning in 1908 with Anne of Green Gables. The book was an immediate success. The central character, Anne Shirley, an orphaned girl, made Montgomery famous in her lifetime and gave her an international following. The first novel was followed by a series of sequels with Anne as the central character. Montgomery went on to publish 20 novels as well as 530 short stories, 500 poems, and 30 essays. Most of the novels were set in Prince Edward Island, and locations within Canada's smallest province became a literary landmark and popular tourist sitenamely Green Gables farm, the genesis of Prince Edward Island National Park. She was made an officer of the Order of the British Empire in 1935.Montgomery's work, diaries and letters have been read and studied by scholars and readers worldwide.Upon leaving Dalhousie, Montgomery worked as a teacher in various Prince Edward Island schools. Though she did not enjoy teaching, it afforded her time to write. Beginning in 1897, she began to have her short stories published in magazines and newspapers. Montgomery was prolific and had over 100 stories published from 1897 to 1907.During her teaching years, Montgomery had numerous love interests. As a highly fashionable young woman, she enjoyed ''slim, good looks'' and won the attention of several young men. In 1889, at 14, Montgomery began a relationship with a Cavendish boy named Nate Lockhart. To Montgomery, the relationship was merely a humorous and witty friendship. It ended abruptly when Montgomery refused his marriage proposal.The early 1890s brought unwelcome advances from John A. Mustard and Will Pritchard. Mustard, her teacher, quickly became her suitor; he tried to impress her with his knowledge of religious matters. His best topics of conversation were his thoughts on Predestination and ''other dry points of theology'', which held little appeal for Montgomery. During the period when Mustard's interest became more pronounced, Montgomery found a new interest in Will Pritchard, the brother of her friend Laura Pritchard. This friendship was more amiable but, again, he felt more for Montgomery than she did for him. When Pritchard sought to take their friendship further, Montgomery resisted. Montgomery refused both marriage proposals; the former was too narrow-minded, and the latter was merely a good chum. She ended the period of flirtation when she moved to Prince Edward Island. However, she and Pritchard did continue to correspond for over six years, until Pritchard caught influenza and died in 1897.
Toon meer Toon minder