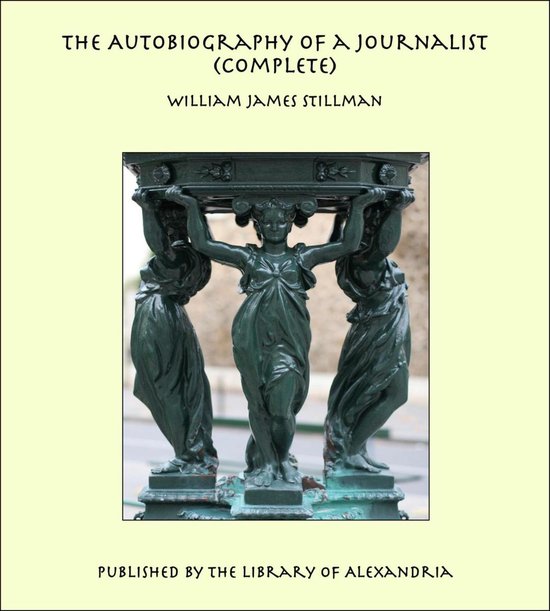 That a man should assume that his life is worth the venture of a record in the form of an autobiography suggests a degree of self-conceit of which I am not guilty. From my own initiative this would never have been written, and the first suggestion that I should write it, coming from a man of such experience in books and judgment of men as the late Mr. Houghton, then head of the firm of Houghton, Mifflin & Co., was as much a surprise to me as the publication will be to any one. The impression it made on me was so vivid that I have never forgotten the details of the occasion which called it out. I had gone with Mr. Houghton and his daughters to the ruins of the Villa of Hadrian, at Tivoli, and, wandering idly amongst them on a beautiful autumn morning, not in the spirit of crude sightseeing, I was led to talk of my experiences more than is my wont to do. ''You should write your life,'' he said to me with a manner of authority which at once convinced me, and I decided that if there should come in my life a pause in which the past could be considered rather than the needs of the present and the cares of the future, I would set about it. Had I at some earlier date entertained such a project, I should have preserved many documents and data now lost, and have been able to write more precisely of some things of greater interest than my personal adventures. But in that part of my life which may be considered relatively of a public character, or in which events of a public interest occurred, I have ample record made at the time. In what is peculiar to myself, and so of relatively trivial moment, dates and the order of events are of little importance. It occurred to me in the connection, that to give a human document of Puritan family life, and the development of a mind from the archaic severity of New England Puritanism to a complete freedom of thought, by a purely evolutionary process, without revolt or revulsion, might be worth doing. For what it is worth I have done it without much consideration of my own dignity, and, candidly, not as to my blunders and peccadilloes, which are of no importance to the story, but as to the earlier mental conditions which were a part of the process. So much for the personality. Orthodox journalists may object to my assumption of their title. In my multifarious occupation and random life I have, as I see when I look back found my highest activity, and rendered my most serious services to others, in my occupation as a journalist—all the rest was fringe or failure. If I have been good for anything it was in connection with, or through my position on, the press. And it would be ungrateful and dishonest if I should omit to bear my testimony to the noble character and large sincerity of the great journal to which the most of my strength for more than twenty years has been given. If ever I had a noble impulse, aroused by wrongs that came to my knowledge during those years, a good cause to defend, or a public abuse to attack, ''The Times'' has never refused to give me room to tell my story, nor have I ever been expected to conform my views to those of the office, or shape my correspondence to any ulterior purpose; nor have I ever done so. And I consider it the greatest honor that has ever come to me to have been so many years in its service, and to have maintained the confidence of its direction. To my critics much that I have told may seem trivial. I cannot judge of what may interest others. I should hardly have believed that my life as a whole could interest a public that does not know me, and I am equally unable to judge of the value which its details may have to others. In default of any criterion beyond my own judgment, I have selected the items which had to me most importance, or had a marked influence on my life or an interest beyond myself. I have told things that will seem trite to Americans, and others that will be commonplace to Englishmen, but I have two publics to think of, differing in slight matters in their knowledge of things