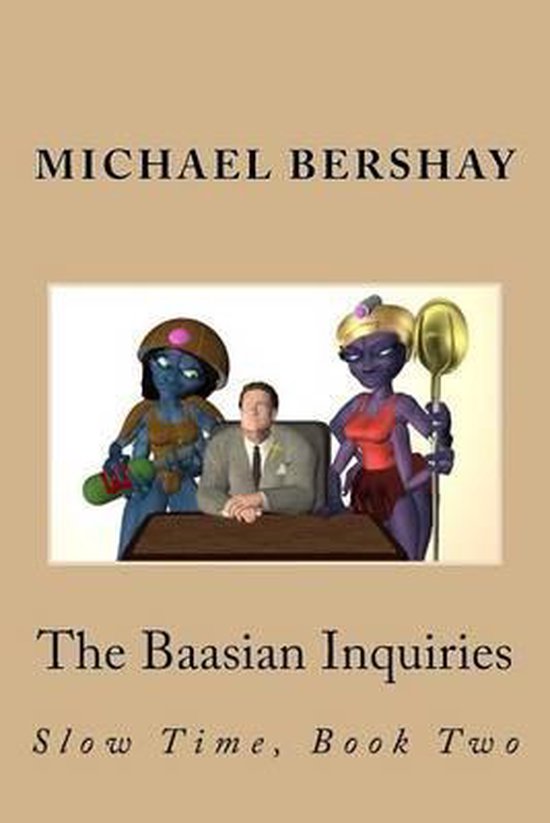 After the chaotic events surrounding their latest visit to Earth (detailed in Book One, ''Alien Adoptions''), the last survivors from the planet Baas demand justice. One of their scientists and three of their adopted humans had been kidnapped and mistreated, and the Baasians demand those responsible to be held publicly accountable. In front of two worlds, hired thug Ed Harper, Teller Munitions CEO Ronald Gold and the fanatical and powerful Rev. Allen Graves find themselves being questioned by their intended victims: Baasian biologist Drasher, homeless science teacher Charlie Schwitters, Yeshua (the historical Jesus) and, through her drawings, prehistoric woman Clover. At stake: future interplanetary trade and diplomacy. All depends on how the US government deals with the three suspects after the Inquiries are finished.While all peoples of both Earth and the Baasian Mothership await the Inquiries, new and unexpected friendships form within the Reconnaissance Ship. Imam Ahmed al-Makhata and his daughter Jazari, originally accidental passengers, become friendlier with the unusual visitors. Gen. Terry Knepper, ordered by the President to evict the Baasians, instead befriends ship captain Mrovinta. Tough ancient Greek Iannis and Charlie's former college teacher, Rebecca Fineberg, fall in love. Jazari brushes Clover's hair and shares sushi with Yeshua. Charlie, Clover, Drasher and Iannis spend the night at the mountain cabin of jam band leader, Aaron Trigulia.But extremism abhors accountability, and its political, religious and corporate adherents do whatever they can to sabotage Earth/Baasian relations. Rev. Graves manipulates his high-level cronies to wage war on the Reconnaissance Ship, several Islamic nations declare war on the Baasians, renegade US soldiers defy orders, and conservative shock jock Roger Owen claims that Drasher tried to bite him back at the Colorado Springs Airport.The original intention of the three suspects was to interrogate Drasher about Baasian weapon technology. But they want nothing to do with an even more potent weapon that the Baasians use at their inquiries: their video technology!Witnessing all of this conflict, Jazari at one point observes, ''The fight for survival just keeps going and going. I must admit that's the main thing about evolution that worries me.''Staunch evolution defender Charlie Schwitters' reply: ''Welcome to the club!''
Toon meer Toon minder