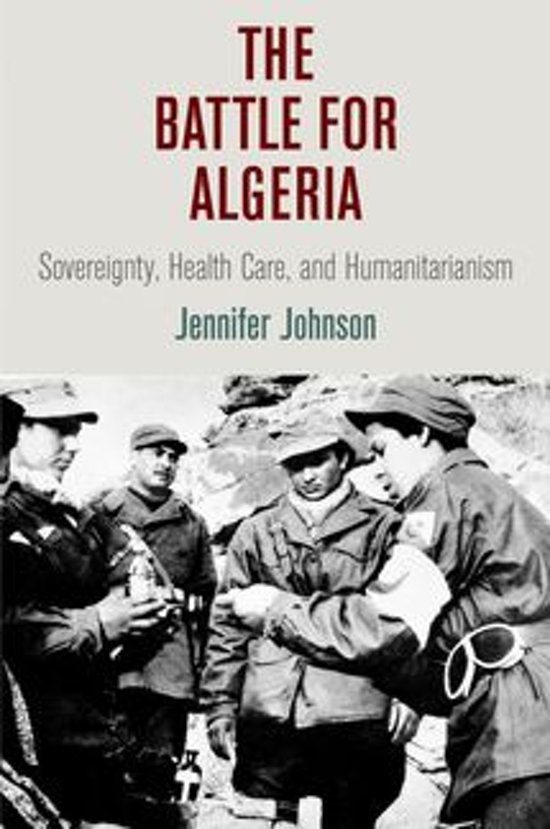 In The Battle for Algeria Jennifer Johnson reinterprets one of the most violent wars of decolonization: the Algerian War (1954-1962). Johnson argues that the conflict was about who—France or the National Liberation Front (FLN)—would exercise sovereignty of Algeria. The fight between the two sides was not simply a military affair; it also involved diverse and competing claims about who was positioned to better care for the Algerian people's health and welfare. Johnson focuses on French and Algerian efforts to engage one another off the physical battlefield and highlights the social dimensions of the FLN's winning strategy, which targeted the local and international arenas. Relying on Algerian sources, which make clear the centrality of health and humanitarianism to the nationalists' war effort, Johnson shows how the FLN leadership constructed national health care institutions that provided critical care for the population and functioned as a protostate. Moreover, Johnson demonstrates how the FLN's representatives used postwar rhetoric about rights and national self-determination to legitimize their claims, which led to international recognition of Algerian sovereignty.


By examining the local context of the war as well as its international dimensions, Johnson deprovincializes North Africa and proposes a new way to analyze how newly independent countries and nationalist movements engage with the international order. The Algerian case exposed the hypocrisy of selectively applying universal discourse and provided a blueprint for claim-making that nonstate actors and anticolonial leaders throughout the Third World emulated. Consequently, The Battle for Algeria explains the FLN's broad appeal and offers new directions for studying nationalism, decolonization, human rights, public health movements, and concepts of sovereignty.

[A] strong, insightful book packed with original and fascinating detail and fresh in its positioning both within the literature on Algeria and the literature on the history of human rights, health care, and humanitarianism. The book succeeds particularly well in bringing to the fore how care for the bodies of Algerians became a site of competition and a means of statebuilding during the war. Scholars from a variety of humanities and social science fields will find its lessons illuminating. -Journal of North African Studies With her careful scholarship Johnson focuses on how the Front de libe'ration nationale (FLN) sought international support for its campaign through the rhetoric-though limited practice-of healthcare for Algerians, as well as diplomatic missions to the newly independent nations of the Arab world, Asia, and, specifically, the United Nations . . . Johnson's narrative is absorbing. Her book draws on interviews and archives to enrich the complexity of the existing narrative and is a further contribution to understanding the war from the perspective of winning over world opinion. -French Studies The Battle for Algeria demonstrates the ways in which sovereignty had been reconfigured in the postwar era-and how the techniques for achieving it were refashioned. In so doing, Jennifer Johnson reveals a very good deal about the international system as well as Algeria's particular struggle. -Roland Burke, La Trobe University The Battle for Algeria is a powerful critique of existing Algerian historiography that successfully integrates Middle East and North African studies into global or international history. -Benjamin Brower, University of Texas at Austin Jennifer Johnson's The Battle for Algeria provides a painstakingly researched and richly descriptive analysis of the strategic importance of medicine, human rights, and humantarianism for Algerian nationalists' evolving and expanding political agencies, and the internationalization of their struggle during the war for independence. -Journal of Global South Studies Jennifer Johnson's excellent new book augments the internationalization of our understanding of the Algerian war by showing how important health and humanitarianism were to it. With archivally rooted contributions on how Algerian nationalists built a health program and how international humanitarian concern-including the Red Crescent-played an important role in arguments for sovereignty, The Battle for Algeria breaks new ground. Appeals to the need for health care and complaints over the violation of the human body were frequent, Johnson powerfully demonstrates, in the war for public opinion that ultimately shifted the conflict. -Samuel Moyn, Harvard University, author of Christian Human Rights
Toon meer Toon minder