The Battle of the Press As Told in the Story of the Life of Richard Carlile by His Daughter, Theophila Carlile Campbell 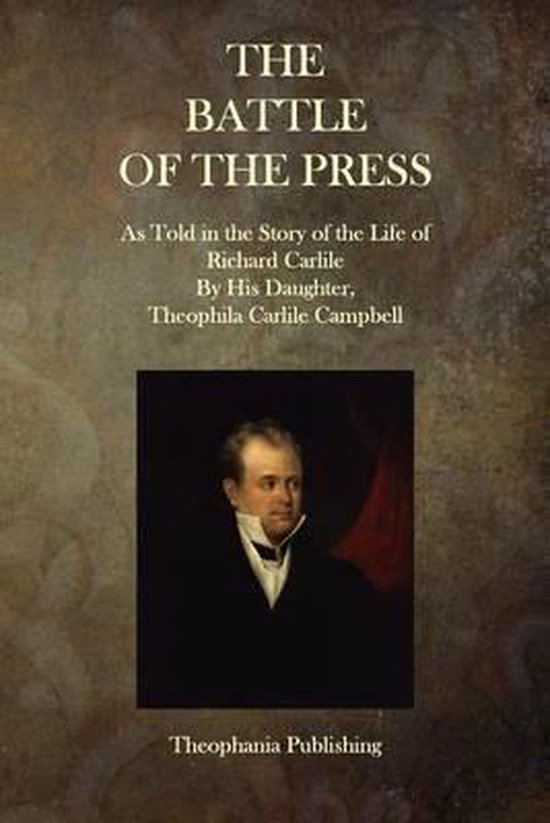 Thank you for checking out this book by Theophania Publishing. We appreciate your business and look forward to serving you soon. We have thousands of titles available, and we invite you to search for us by name, contact us via our website, or download our most recent catalogues. In presenting to the present generation of England and America the comprehensive though necessarily condensed history of the life and work of the great pioneer in the cause of mental freedom, I am actuated by two principal motives, the foremost of which is the desirable duty of presenting to the people of to-day a faithful account of the work done by Carlile and the enormous sacrifices he made, as well as the terrible imprisonments he endured in the accomplishment of the task he set himself to do, namely, to establish for his countrymen a really Free Press, and the right of free oral discussion, as, up to his time, neither right had ever been accorded to any of the peoples of Europe by either Church or State. In the prosecution of his self-appointed task he was assailed by the reigning powers with all the malignity and religious fury that characterised the days of the Inquisition. No lie was too black to be hurled at him, no motive too low to be imputed to him, the minds of his countrymen were purposely influenced against him in order that they might not understand his real objectthat of benefiting themand to divert attention from his enemies' misdoing. So he was given the horns, hoofs, and tail of Satan himself, and invested with all the attributes of this fallen angel. It is not to be wondered at that the majority of the people at that time were so influenced, when we consider the very limited resources of the times in regard to information. Almost all of this was carried and given by word of mouth, and it was naturally colored by the views or feelings of those who gave it out. To rescue the name of a true friend of the people from the undeserved obloquy or silence under which it has been so long obscured, and to place his memory and name where it truly belongs in the list of the honored dead of his country, and in the hearts of his countrymen, there to dwell as long as English history lasts, is the second motive. In doing this we may turn upon all the evidences, both public and private, the modern searchlight of critical investigation, and I am satisfied that when the clouds of malignant abuse and the mass of unsubstantiated charges that were heaped upon his name and fame by those who were interested in doing so are cleared away, his name and the record of his life will stand out from the past as a star of the first magnitude stands out from the darkened sky of nightbright, clear, and pure. I therefore, with confidence, commit the record of Carlile, as a man with the highest aims, unselfish purpose, and finest motives, who gave the efforts of a noble life and high moral purpose for the advancement of truth and the benefit of his fellow-men, to an enlightened and unbiassed generation, not doubting that it will recognise the true merit of the man and appreciate the value of his accomplishments for the benefit not only of his countrymen but of the world at large.
Toon meer Toon minder