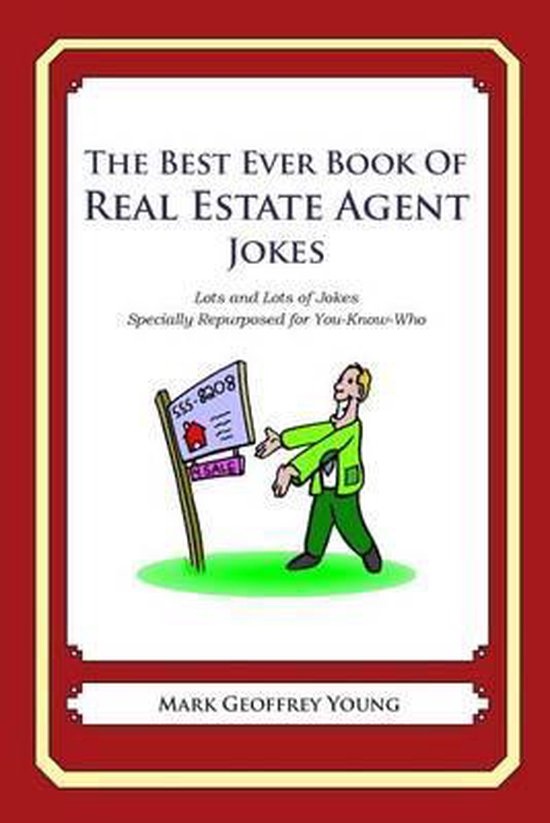 If you’ve ever heard a Jewish, Blond, Italian, Irish, Blond, Libyan, Catholic, Mexican, Polish, Australian, Norwegian, or an Essex Girl, Newfie, Mother-in-Law, or joke aimed at a minority, this book of real estate agent jokes is for you. In this not-so-original book, The Best Ever Book of Real Estate Agent Jokes; Lots and Lots of Jokes Specially Repurposed for You-Know-Who, Mark Young takes a whole lot of tired, worn out jokes and makes them funny again. The book of Real Estate Agent jokes is so unoriginal, it’s original. And, if you don’t burst out laughing from at least one accountant joke in this book, there’s something wrong with you.This book has so many Real Estate Agent jokes, you won’t know where to start. For example:Why do Real Estate Agents wear slip-on shoes? You need an IQ of at least 4 to tie a shoelace.***A Real Estate Agent and his wife were sitting around the breakfast table one lazy Sunday morning. The Real Estate Agent turned to his wife and said: “When I die, I want you to sell all my stuff.”“Why would you want me to do that?,” asked his wife.“I figure that you’ll eventually remarry, and I don’t want some asshole using my stuff,” replied the Real Estate Agent.The Real Estate Agent’s spouse said: “What makes you think I’d marry another asshole?”***Did you hear about the Real Estate Agent who wore two jackets when he painted his house?The instructions on the can said: “Put on two coats.”***Why do Real Estate Agents laugh three times when they hear a joke? Once when it is told, once when it is explained to them, and once when they understand it.
Toon meer Toon minder