The Bizarre and the Wondrous from the Land of the Rising Sun! 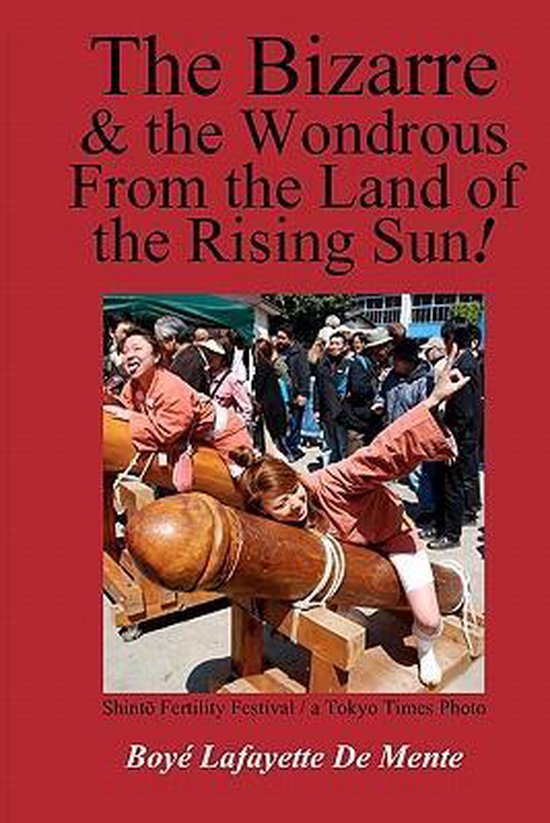 The Bizarre and the Wondrous from the Land of the Rising Sun highlights unique aspects of Japan—ancient and modern—that have made the country fascinating to Westerners since they first stumbled upon the islands in 1543. These unusual attractions range from high-tech robots that do such things as act as tourist guides and perform delicate surgery, to festivals that go back more than two thousand years and strike many foreign visitors as being bizarre. Among the celebrations that could be labeled as bizarre are annual fertility festivals that feature authentic-looking replicas of the male penis carved in wood, from purse-size versions to ones that are over two meters long and weigh up to 800 pounds. The best known of the fertility festivals is the one staged each March 15 by the Tagata Shrine near the city of Nagoya. The largest wooden penis is carved anew each year, and after the ceremony is kept on display in the main shrine building until the following year when it is sold to private buyers. On the day of the festival the large version of the erect male organ is pulled through the streets on a wheeled cart by up to 12 men to the delight of raucous crowds and child-bearing-age women who try to touch the replica in order to increase their chances of becoming pregnant. Other penis replicas are edible versions made like candy and cookies that are sold to visitors as snacks and souvenirs to take home. Also on the incredible side is a legend that the young Jewish man now known and worshipped by Christians as Jesus Christ the son of God did not die on the cross—that, in fact, he lived and died in Herai Village in Japan. According to the Christian Bible Jesus was born in Israel. There is no further mention of him in the Bible until he is 12 years old when he appears at a Jewish synagogue and lambasts the rabbis for their un-Christian like behavior. The next mention of Jesus in the Bible is when he is in his early 30s and shows up at the Jordan River to be baptized by John, a well-known Jewish preacher. According to the Japanese legend, Jesus and his brother Isukiri spent most of those missing years in Japan, returning to Judea when Jesus was 34 years old. The story goes on to say that after he was betrayed to the Roman authorities he fled back to Japan, and it was his brother who was crucified. The story adds that Jesus married a Japanese girl, became a rice farmer, and lived the rest of his life in Herai [later renamed Shingo]. There is a tomb in Herai that has long been known as the burial place of Jesus [Jehova], the son of Mary. In the book, De Mente goes on to explain how the legend and the tomb became known to present-day Japanese authorities and was publicized in English for the first time in 1935. De Mente says he learned about the story in Tokyo in the early 1950s when he was editor of a monthly cultural magazine, including seeing a photograph of documentary evidence from a museum in Herai. Other fascinating stories in the book include how the infamous secret agents and assassins known as ninja [neen-jah] became a major part of Japanese history; why and how Japan became the first nation in the world to have a national network of roadside inns spaced one day’s march apart; why the Japanese are so skilled at producing arts and crafts of extraordinary beauty; why single Japanese girls and men have a hard time hooking up; why Japan’s izakaya are more fun than Irish pubs; why rice and other vegetables grow on top of buildings; how the Japanese came up with a new reason for wearing clothes…and some 50-plus other fascinating stories.
Toon meer Toon minder