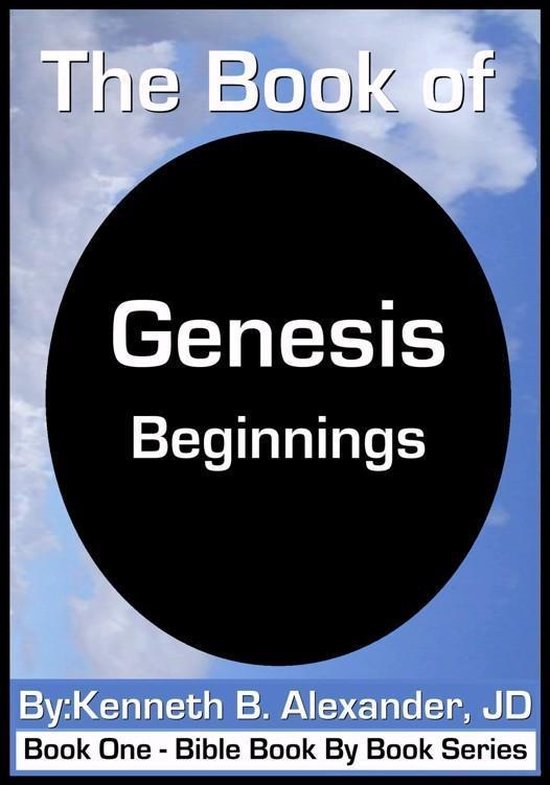 Genesis is the Book of beginnings. That God (YHWH common name Elohim) is the primary creator is apparent throughout the book. YHWH is the true name of God however the Jews were not permitted to say God's true name so they used Elohim as a substitute. He created the Heavens and the earth and all plant and animal life that was to populate the planet. He created man and created a special nation for Himself called. Israel. Israel means ''struggle with God'' named after Jacob wrestling with God all night at the river Jabbok. The nation continued to struggle with God throughout its existence as a nation. Eventually God became frustrated with their lack of obedience and had physical Israel conquered. Today the true Israel is a spiritual Israel composed of those who accept Christ as their Savior by faith.


In Genesis we see some of the most important developments in the foundation of the Israelite nation, which is the foundation for everything that was to come later. We have seen Christ and His role as the logos, the word of the Father. We have seen that He existed with the Father from the beginning as a principal part of the Great Trinity. It was no different when he appeared on earth as the Son of God. While here, He was the representation and mouthpiece of the Father. ''Have I been so long with you, and yet you have not come to know Me, Philip? He who has seen Me has seen the Father; how can you say, 'Show us the Father'? ''Do you not believe that I am in the Father, and the Father is in Me? The words that I say to you I do not speak on My own initiative, but the Father abiding in Me does His works'' (John 14:9-10). Jesus was the exact representation of the Father and He only spoke and did what was revealed to Him by the Father. As John said: ''All things came into being through Him, [Christ] and apart from Him nothing came into being that has come into being'' (John 1:1-3). On earth it was the Father working through the Son.


The Father was the Creator of the heavens and the earth, but it was given Christ to speak it into existence by the word. Even now the Father has given the Son (Christ) all authority in heaven and earth. As Christ said in His parting words: ''All authority has been given to Me in heaven and on earth'' (Matthew 28:18). The Father had this plan in mind from before the world was created. ''Blessed be the God and Father of our Lord Jesus Christ, who has blessed US with every spiritual blessing in the heavenly places in Christ, just as He chose us in Him before the foundation of the world, that we would be holy and blameless before Him. In love He predestined us to adoption as sons through Jesus Christ to Himself, according to the kind intention of His will,'' (Ephesians 1:3-5). And: ''For those whom He foreknew, He also predestined to BECOME CONFORMED TO THE IMAGE OF HIS SON, so that He would be the firstborn among many brethren; and these whom He predestined, He also called; and these whom He called, He also justified; and these whom He justified, He also glorified'' (Romans 8:29-30). Finally: ''Yet we do speak wisdom among those who are mature; a wisdom, however, not of this age nor of the rulers of this age, who are passing away; but we speak God's wisdom in a mystery, the hidden wisdom which God predestined before the ages to our glory; the wisdom which none of the rulers of this age has understood; for if they had understood it they would not have crucified the Lord of glory; but just as it is written, ''THINGS WHICH EYE HAS NOT SEEN AND EAR HAS NOT HEARD, AND which HAVE NOT ENTERED THE HEART OF MAN, ALL THAT GOD HAS PREPARED FOR THOSE WHO LOVE HIM'' (1 Corinthians 2:6-9; Isaiah 64:4).


The process of creation gave birth to the creative Word of God which would be used by prophets in creating what was to come in the process leading to Christ. Abraham laid the foundation for faith to be reckoned to us as righteousness, just as Christ proclaimed faith in Him as salvation. Isaac produced the twins of which one would be called Israel, the beginning of a nation. Jacob/israel gave birth to the 12 Sons of Israel upon which a nation would be built. Joseph was Christ, the savior and deliverer of a nation.


Those who did not love God, or follow Him, gave existence to the enemies of God that would have to be subdued over the coming ages. The reasons for this are clearly defined in Genesis. Even after God destroyed the world by a flood, the evil slipped through and recreated itself on this side of the deluge.


Evil bodies may have died but eternal spirits continued. Yet despite the Satanic opposition God, using real people who made real mistakes, formed the beginnings of the Nation of Israel through Abraham, Isaac and Jacob (later renamed Israel). Israel was and always will be a small nation but mighty in God. ''For you are a holy people to the LORD your God; the LORD your God has chosen you to be a people for His own possession out of all the peoples who are on the face of the earth. ''The LORD did not set His love on you nor choose you because you were more in number than any of the peoples, for you were the fewest of all peoples, but because the LORD loved you and kept the oath which He swore to your forefathers'' (Dt 7:6—8).


Joseph, after being imprisoned for 11 years (''Until the time that his word came to pass, The word of the LORD tested [refined him] Psalm 105:19) was raised to the throne of Pharaoh and saved his family so they could become a great nation. You don't see God moving through all the surrounding pagan nations but you find Him moving through Israel His chosen people. This continues through the New testament where the spiritual Israel continues the battle against satanic powers and principalities (Ephesians 6).


I. NAME OF THE BOOK - Genesis


A. In Hebrew (i.e. the Masoretic Text) the name is the first word of the book, bereshith, meaning ''in the beginning'' or ''by way of beginning.''


B. From the Greek Bible (i.e. Septuagint Greek translation), the name is Genesis, which means ''beginning'' or ''origin,'' taken from Gen. 2:4a.


A. This is the first book of the first section of the Hebrew canon called ''The Torah'' or ''teachings'' or ''Law.''


B. This section in the Septuagint is known as the Pentateuch (i.e. five scrolls).


C. It is sometimes called ''The Five Books of Moses'' in English.


D. Genesis—Deuteronomy is a continuous account by (or edited by) Moses concerning creation through Moses' lifetime.


III. GENRE—The book of Genesis is primarily theological, historical narrative but it also includes other types of literary genre:


A. The Bible itself does not name the author (as is true of many OT books). Ultimately the author is God!


A. Genesis covers the period from the creation of the cosmos to Abraham's family. It is possible to date Abraham's life from secular literature of the period. The approximate date would be 2000 B.C., the second millennium B.C. The basis for this is

B. The early events of Genesis 1—11 are true historical events (possibly historical drama) but undatable by current available knowledge.


C. It must be remembered when studying Genesis that the historical events are recorded by Moses who led the people of God out of Egypt in 1445 B.C., based on 1 Kings 6:1. Therefore, either by oral tradition, unknown written sources, or direct divine revelation, Moses records ''how it all began'' focusing on ''who'' and ''why,'' not ''how'' and ''when''!


SOURCES FOR CORROBORATING THE HISTORICAL SETTING OF GENESIS


A. Other Biblical books


a. The closest Mesopotamian account dealing with creation, Enuma Elish, dating from (1) NIV Study Bible, about 1900—1700 B.C. or (2) John H. Walton's Ancient Israelite Literature in Its Cultural Context, p. 21, about 1000 B.C. It was found in Ashurbanipal's library at Nineveh and other copies were found at several other places. There are seven cuneiform tablets written in Akkadian that describe creation by Marduk.