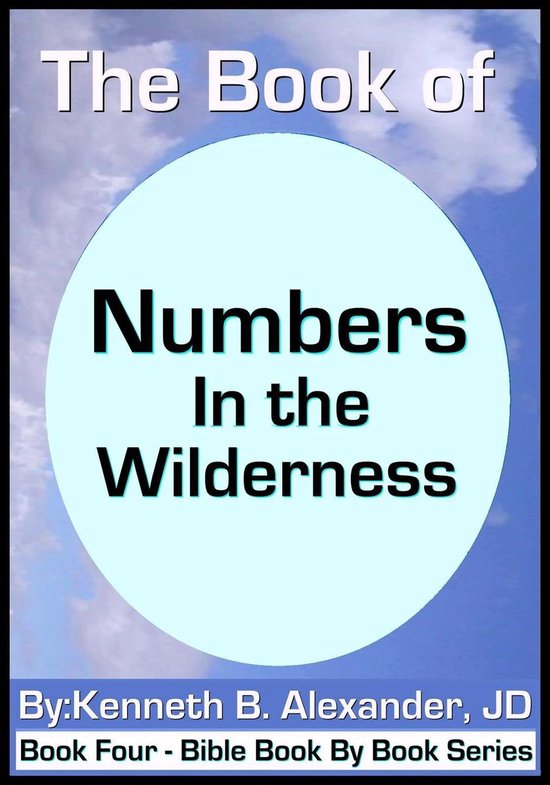 
The fourth book of the Hebrew Torah (The Law) called the ''Pentateuch'' in Greek, is the Book we know as ''Numbers''. In the Hebrew Bible it is called ''be-midbar'' meaning ''in the wilderness.'' In the Greek Septuagint version of the Bible (LXX) it is called ''Numbers,'' and this name is now the usual title of the book. It is so called because it contains a record of the numbering of the people in the wilderness of Sinai (Chs. 1â 4), and of their numbering afterwards on the plain of Moab (Ch. 26). The Book takes up where Exodus left off in the saga of Israel in the wilderness.


The Hebrew name for the Book ''in the wilderness'' is a better title for the Book. Although the book is noted for its two censuses, important events took place in the wilderness which relate to the present time. We will go through the book with the historical developments discussed first. The priestly elements and the censuses will be discussed at the later portion of the study.


The Book explains why Israel had to stay in the wilderness for forty years. It was an 11 Day journey from Egypt to the Promised Land of Canaan. But spies sent in to access the land brought back a bad report and God in His anger punished all of Israel.


The whole of Israel's stay in the wilderness generally portrays an unhappy people blaming Moses for their unhappiness. Time and time again Moses had to defend himself against unwarranted accusations. Ultimately it was God who had to stand up for him calling him ''the humblest man to ever walk the earth''. Time and time again God purposed to destroy the people for their grumbling and accusations. Each time Moses had to implore the Lord not to do that. Nevertheless God would send judgments among them in the form of plagues, fiery serpents and other expressions of His wrath. Thousands were killed. Moses had to stave off the extent of the destruction by bargaining with God not to completely destroy the people. This clearly shows that, even in this day, we should not grumble against God as He deals with our hearts. His chastenings are just. They are designed to get us into our Promised Land the Kingdom of God.


We should follow New Testament quotations that relate to difficulties in our walks with God. For instance, as James said of the Christians of his day, which should have applied to Israel in the wilderness: ''Consider it all joy, my brethren, when you encounter various trials, knowing that the testing of your faith produces endurance [steadfastness]. And let endurance [steadfastness] have its perfect result, so that you may be perfect and complete, lacking in nothing'' (James 1:2-4).


And Peter said: ''In this you greatly rejoice, even though now for a little while, if necessary, you have been distressed by various trials, so that the proof of your faith, being more precious than gold which is perishable, even though tested by fire, may be found to result in praise and glory and honor at the revelation of Jesus Christ;'' (1 Peter 1:6-7). And it was said of Christ Himself: ''Although He was a Son, He learned obedience from the things which He suffered'' (Hebrews 5:8). The people of Israel had such great promises from the Lord but they, like us, sometimes could not endure with joy the hardship that is the Lord testing our faith.


The complaining began in Exodus. They complained that the Egyptians came after them. They complained until Moses parted the Red (Reed) Sea. They complained on the other side because they had no water or food. In short their faith in God was at ''zero'' despite what God had done in delivering them from slavery and protecting them from the Plagues he brought against Egypt. Nevertheless the next generation made it to the banks of the Jordon River poised, after forty years, to possess the Land.

The Book of Numbers


At length, on the twentieth day of the second month, the signal for departure from Sinai was given. The cloud which had rested upon the Tabernacle moved; the silver trumpets of the priests summoned ''the camps'' of Israel to their march, and as the Ark itself set forward. Moses, in joyous confidence of faith, spoke those words of mingled prayer and praise which, as they marked the progress of Israel towards the Land of Promise, have ever been the signal in every forward movement of the Church. The general destination of Israel was, in the first place, ''the wilderness of Paran,'' a name known long before. This tract may be described as occupying the whole northern part of the Sinaitic peninsula, between the so-called Arabah on the east, and the wilderness of Shur in the west, which separates Philistia from Egypt. Here Israel was, so to speak, hedged in by the descendants of Esau—on the one side by the Edomites, whose country lay east of the Arabah, and on the other by the Amalekites, while right before them were the Amorites.


Such then was the goal and such the line of march before Israel, when, on that day in early summer, the Ark and the host of the Lord moved forward from the foot of Sinai. At the reiterated request of Moses, Hobab, the brother-in-law of Moses, had consented to accompany Israel, and to act as their guide in the wilderness, in the faith of afterwards sharing ''what goodness God'' would do to His people. Although the pillar of cloud was the real guide of Israel in all their journeying, yet the local knowledge of Hobab would manifestly prove of the greatest use in indicating springs and places of pasturage. And so it always is. The moving of the cloud or its resting must be our sole guide; but under its direction the best means which human skill or knowledge can suggest should be earnestly sought and thankfully used (Nu 10:11-35).


The Lord spoke to Moses to select men to spy out the Promised Land, now populated by Canaanites (Nu. 13:4-16). They were to determine about the land ''whether the people who live in it are strong or weak, whether they are few or many. ''How is the land in which they live, is it good or bad? And how are the cities in which they live, are they like open camps or with fortifications? ''How is the land, is it fat or lean? Are there trees in it or not? Make an effort then to get some of the fruit of the land.'' Now the time was the time of the first ripe grapes'' (Nu. 13:18-20).


17â 20. The instructions of Moses to the twelve spies were thus comprehensive; a thorough report of the land—its produce, the peoples, and their towns—was required in the reconnaissance mission. The plan of approach was practical, and it shows that Moses had some sense of the lay of the land of Canaan. From their location in the northernmost boundary of the Desert of Paran, the spies were to move into the Negev, the southernmost part of the land of Canaan. Then they were to ascend the hill country and to journey as far as they could through the land. The journey upward was not only geographical; there is a sense in which we may see this upward journey as a symbol of assault, conquest, and victory.


The scouts were to give special attention to the people and the produce of the land, to the cities and towns, to the soil and the presence or absence of forests. Since the journey was at the time of the harvest of grapes, there is a personal note that they should bring back some of the fruit they might discover in the land. They were to show themselves courageous in taking some of the fruit words that would later come to h