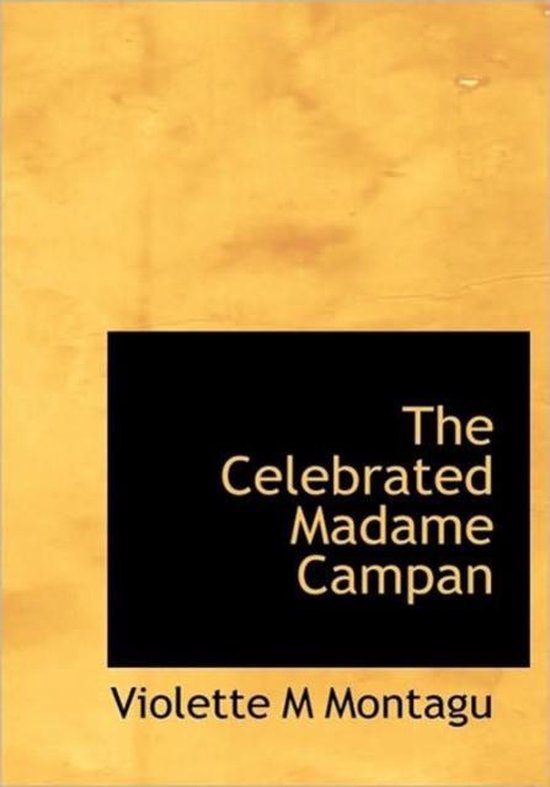 Text extracted from opening pages of book: THE CELEBRATED MADAME CAMPAN LADY-IN-WAITING TO MARIE ANTOINETTE AND CONFIDANTE OF NAPOLEON BY VIOLETTE M. MONTAGU AUTHOR OF SOPHIE DA WES, QUEEN OF CHANTILLY THE ABBE EDGEWORTH AND HIS FRIENDS 1 EUGENE DE BEAUHARNAIS, THE ADOPTED SON OF NAPOLEON' ETC. ETC. LONDON EVELEIGH NASH 1914 TO MY MOTHER TO WHOM I OWE THIS BOOK PREFACE Tis but a mediocre author who needs to apologize for his sins of omission or commission before the Argus eyed critic has had time to rend the ewe-lamb to pieces; the apologies, like the tears in Heine's Im mortal Lyrisches Intermezzo, usually come after the frail bark has been launched upon the sea of Literature to be wrecked on the sharp rocks of Criticism, become becalmed in the Arctic Circle of Oblivion, or per chance sail with the chosen few into the peaceful harbour of that ultima thule Popularity. I fear it will be said that I have taken strange liberties with Mme Camparis Memoirs, from which the first part of my book was gleaned. Why are those interesting memoirs so little read in England nowa days ? Perhaps because they fill three Volumes who, in this age of hurry, takes the trouble or has the leisure to read anything so lengthy ? perhaps because they are written in a somewhat stilted manner, lack sequence, and contain too many repetitions of the same fact, and perhaps because the authoress mentions several persons who are mere names to the general public, and concludes just at the most poignant period of the Revolution. And yet the story of her own adventures during the Reign of Terror is full of exciting situations. In Part I: At the Court of Marie Antoinette, I have been careful to omit nofte of the chiefevents mentioned by the queen's waiting woman, I have furnished explanatory notes and vii PREFACE biographies of the personages who flit across the stage, and have endeavoured to keep to the original diapason. The second part of my book: The Governess of the Bonapartes, is taken from contemporary memoirs, and contains extracts from Mme Campan's corre spondence with her favourite pupil, Hortense de Beauharnais, the wife of Louis Bonaparte, and the mother of Napoleon in, which letters have never been translated into English; they throw many side-lights upon the Emperor's home-life, for Mme Campan, both as waiting-woman to Marie Antoinette, and as governess to the Imperial family, enjoyed the con fidence of her masters, and heard many secrets which led to the undoing of more than one of those masters. So great was Mme Campan's fame, not only in Europe but also in America and India, as the governess of Pauline, Caroline, and Charlotte Bona parte and Hortense, Stephanie, and Emilie de Beauharnais, and of many of the beautiful and witty women who adorned Napoleon's Court which Mine Campan had helped to form that when that great Emperor organized the first Imperial Educational Establishment of the Legion of Honour at Ecouen, he gave Mme Campan the post of directress. My intention in writing this book has been to present a faithful picture of the France of the ( Eil de JBceu/ and of that greater France when no educa tion was considered complete without a sojourn in Paris, that Parnassus whither Napoleon, the mas. ter mind, invited the world's most gifted artists, musicians, litterateurs, scientists, and thinkers. VIOLETTE M. MONTAGU. PARIS, 1914. viii CONTENTS PART I AT THE COURT OF MARIEANTOINETTE CHAPTER I PAGE Birth of Henrietta Genest The origin of the Genest family-Education of the future lectrice Henriette accepts her first situation She makes the acquaintance of the Rot Bien-Aimt Mesdames de France . . . . / . i CHAPTER II Louis XV surprises his daughters' lectrice in the act of making cheeses Madame Louise takes the veil Arrival in France of Marie Antoinette Henriette loses her heart Mesdames try to find a husband for their lectrice The origin of the Campan family Marie Antoinette makes Henriette Campan her waiting-woman Mesdames* hatred for Ma
Toon meer Toon minder