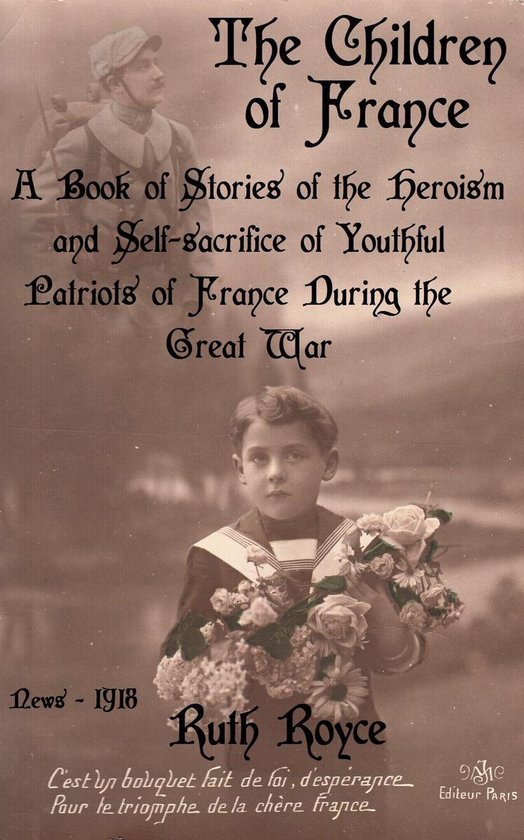 
While the Author cannot personally vouch for the stories related in this volume, she has full confidence in the sources of her information—men who have seen and heard on the battlefields of France, and who have related to her these and many other like incidents illustrating the heroism of the Children of France. Some of the stories the relators have learned through personal observation, while others have come to them indirectly. The author, therefore, believes each story set down here to be authentic, and so offers them to the liberty-loving boys and girls of America.


The story of the heroism of the Children of France never will be fully told. Many of these little patriots have suffered the supreme penalty for their devotion to their country, leaving neither track nor trace of themselves. That they have disappeared is all that is known of them, and thus the stories of their deeds of valor have died with them.


In no other period of the world's history have there been so many instances of self-sacrificing patriotism on the part of children as have come from France during the great war. Through all such stories as have come to light, there runs a spirit of heroism that is sublime. Such stories should and will prove an inspiration to every boy and girl of America and surely will lead them up to a more perfect manhood and womanhood.


In this little volume are set down the stories of many devoted little French boys and girls, some of whom have offered their lives for their country, others of whom have passed through perils that would try the strongest and bravest of men, and yet lived to be honored by a grateful government for their deeds of heroism. How Remi the Brave, a lad of ten, won the Cross of War; the story of Little Mathilde who saved the French garrison from the Uhlan raiders; Marie the Courageous, who remained at home when the Germans captured the town in which she lived, and kept the French informed, knowing that if caught she would surely be shot as a spy; how the Hero of the Guns saved the day by working the machine guns when nearly all their crews were dead or wounded; the story of the Little Soldier of Mercy who, though a timid lad, forgot his fears, and working under fire saved the life of many a wounded man; how Little Gené locked the Bavarian Dragoons in the cellar of her home and captured the lot of them, are a few of the thrilling tales of the patriotism and heroism of the Children of France that form one of the most fascinating chapters in the history of the great world war. They will make the heart of every boy and girl beat faster, they will grip the heartstrings of all who read and bring them to a better realization of their duty to their Flag and to their Country.