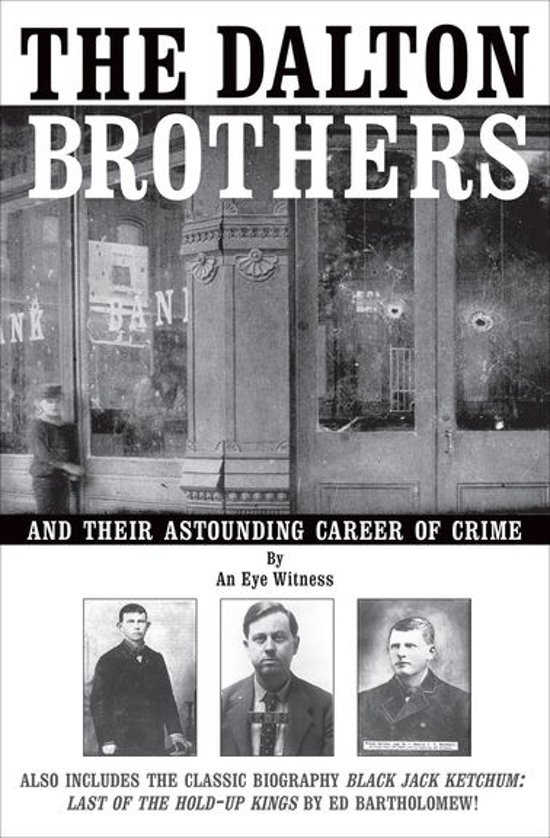 Two classic accounts of some of the Old West's most infamous outlaws—the Dalton Gang and "Black Jack" Ketchum—in one volume.


Being an outlaw in the Old West was a dangerous, grisly business—twenty-three gunshot wounds and living to tell the tale, falling out of a moving train, decapitation due to a hanging gone wrong, life on the lam, horse thievery, illegal alcohol trade, and more. This new volume collects two long out-of-print classic works—The Dalton Brothers and Their Astounding Career of Crime (first published in 1892 featuring "numerous illustrations reproduced from photographs taken on the spot"), about the incredible criminal exploits of the Dalton Gang as told by an anonymous "Eye Witness," and Black Jack Ketchum: Last of the Hold Up Kings (first published in 1955), about Thomas Edward "Black Jack" Ketchum of the infamous Hole-in-the-Wall Gang as told by Ed Bartholomew.


These notorious outlaws of the Old West gained their infamy robbing trains, and all, except for one, died as violently as they lived—two of the Daltons during a bank robbery in 1892, a third in 1894, and Black Jack Ketchum in 1901 by hanging. These two classic accounts are brought together for the first time in this paperback collection of colorful stories about the two gangs. This is a must-read for anyone interested in the true stories of the Old West and nineteenth-century criminals.