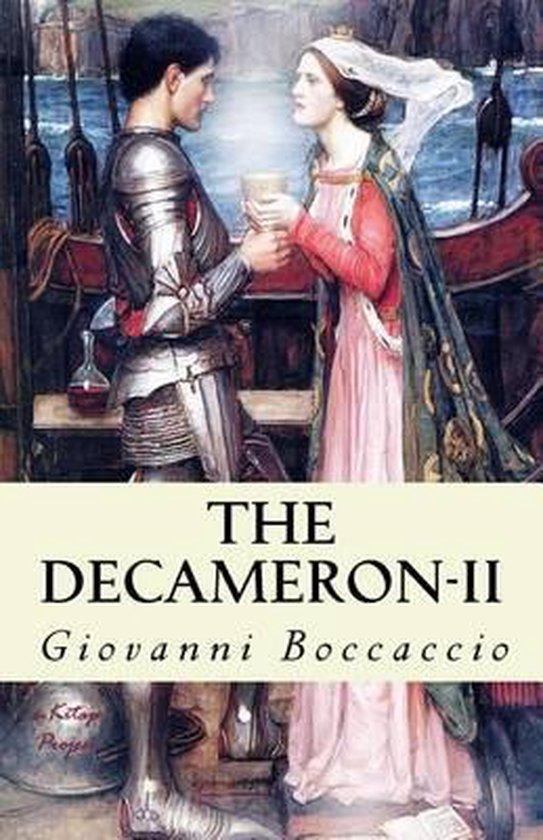 In this Volume-two, ”Endeth here the fourth day of the Decameron, beginneth the fifth, in which under the rule of Fiammetta discourse is had of good fortune befalling lovers after divers direful or disastrous adventures. ” All the east was white, nor any part of our hemisphere unillumined by the rising beams, when the carolling of the birds that in gay chorus saluted the dawn among the boughs induced Fiammetta to rise and rouse the other ladies and the three gallants; with whom adown the hill and about the dewy meads of the broad champaign she sauntered, talking gaily of divers matters, until the sun had attained some height. —DETAILED CONTENTS— - FIFTH DAY - NOVEL I. - Cimon, by loving, waxes wise, wins his wife Iphigenia by capture on the high seas, and is imprisoned at Rhodes. He is delivered by Lysimachus; and the twain cap-ture Cassandra and recapture Iphigenia in the hour of their marriage. They flee with their ladies to Crete, and having there married them, are brought back to their homes. NOVEL II. - Gostanza loves Martuccio Gomito, and hear-ing that he is dead, gives way to despair, and hies her alone aboard a boat, which is wafted by the wind to Susa. She finds him alive in Tunis, and makes herself known to him, who, having by his counsel gained high place in the king's favour, marries her, and returns with her wealthy to Lipari. NOVEL III. - Pietro Boccamazza runs away with Agnolella, and encounters a gang of robbers: the girl takes refuge in a wood, and is guided to a castle. Pietro is taken, but escapes out of the hands of the robbers, and after some adventures arrives at the castle where Agnolella is, marries her, and returns with her to Rome. NOVEL IV. - Ricciardo Manardi is found by Messer Lizio da Valbona with his daughter, whom he marries, and remains at peace with her father. NOVEL V. - Guidotto da Cremona dies leaving a girl to Giacomino da Pavia. She has two lovers in Faenza, to wit, Giannole di Severino and Minghino di Mingole, who fight about her. She is discovered to be Giannole's sister, and is given to Minghino to wife. NOVEL VI. - Gianni di Procida, being found with a damsel that he loves, and who had been given to King Frederic, is bound with her to a stake, so to be burned. He is recognized by Ruggieri dell' Oria, is delivered, and marries her. NOVEL VII. - Teodoro, being enamoured of Violante, daughter of Messer Amerigo, his lord, gets her with child, and is sentenced to the gallows; but while he is being scourged thither, he is recognized by his father, and being set at large, takes Violante to wife. NOVEL VIII. - Nastagio degli Onesti, loving a damsel of the Traversari family, by lavish expenditure gains not her love. At the instance of his kinsfolk he hies him to Chiassi, where he sees a knight hunt a damsel and slay her and cause her to be devoured by two dogs. He bids his kinsfolk and the lady that he loves to breakfast. During the meal the said damsel is torn in pieces before the eyes of the lady, who, fearing a like fate, takes Nastagio to husband. NOVEL IX. - Federigo degli Alberighi loves and is not loved in return: he wastes his substance by lavishness until nought is left but a single falcon, which, his lady being come to see him at his house, he gives her to eat: she, knowing his case, changes her mind, takes him to husband and makes him rich. NOVEL X. - Pietro di Vinciolo goes from home to sup: his wife brings a boy into the house to bear her company: Pietro returns, and she hides her gallant under a hen-coop: Pietro explains that in the house of Ercolano, with whom he was to have supped, there was discovered a young man bestowed there by Ercolano's wife: the lady thereupon censures Ercolano's wife: but unluckily an ass treads on the fingers of the boy that is hidden under the hen-coop, so that he cries for pain: Pietro runs to the place, sees him, and apprehends the trick played on him by his wife, which nevertheless he finally condones, for he is not himself free from blame.
Toon meer Toon minder