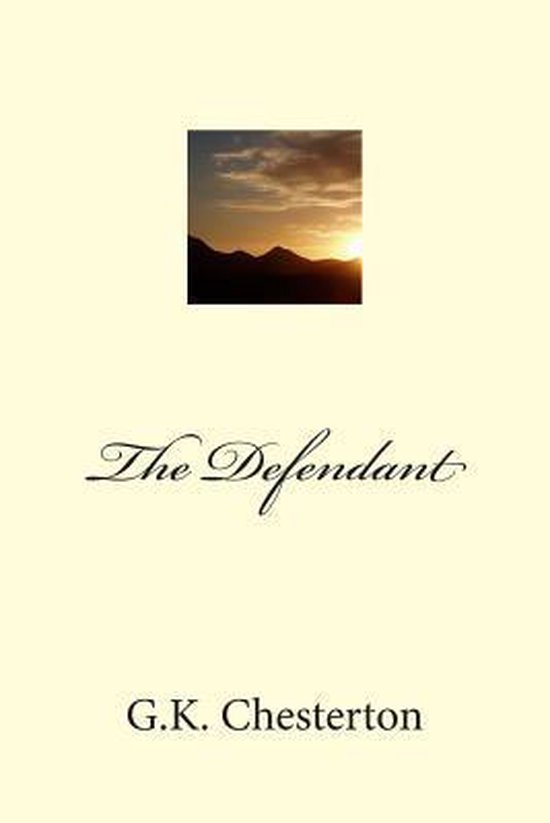 The reissue of a series of essays so ephemeral and even superfluous may seem at the first glance to require some excuse; probably the best excuse is that they will have been completely forgotten, and therefore may be read again with entirely new sensations. I am not sure, however, that this claim is so modest as it sounds, for I fancy that Shakespeare and Balzac, if moved to prayers, might not ask to be remembered, but to be forgotten, and forgotten thus; for if they were forgotten they would be everlastingly re-discovered and re-read. It is a monotonous memory which keeps us in the main from seeing things as splendid as they are. The ancients were not wrong when they made Lethe the boundary of a better land; perhaps the only flaw in their system is that a man who had bathed in the river of forgetfulness would be as likely as not to climb back upon the bank of the earth and fancy himself in Elysium.If, therefore, I am certain that most sensible people have forgotten the existence of this book—I do not speak in modesty or in pride—I wish only to state a simple and somewhat beautiful fact. In one respect the passing of the period during which a book can be considered current has afflicted me with some melancholy, for I had intended to write anonymously in some daily paper a thorough and crushing exposure of the work inspired mostly by a certain artistic impatience of the too indulgent tone of the critiques and the manner in which a vast number of my most monstrous fallacies have passed unchallenged. I will not repeat that powerful article here, for it cannot be necessary to do anything more than warn the reader against the perfectly indefensible line of argument adopted at the end of p. 28. I am also conscious that the title of the book is, strictly speaking, inaccurate. It is a legal metaphor, and, speaking legally, a defendant is not an enthusiast for the character of King John or the domestic virtues of the prairie-dog. He is one who defends himself, a thing which the present writer, however poisoned his mind may be with paradox, certainly never dreamed of attempting.Criticism upon the book considered as literature, if it can be so considered, I should, of course, never dream of discussing—firstly, because it is ridiculous to do so; and, secondly, because there was, in my opinion, much justice in such criticism.But there is one matter on which an author is generally considered as having a right to explain himself, since it has nothing to do with capacity or intelligence, and that is the question of his morals.I am proud to say that a furious, uncompromising, and very effective attack was made upon what was alleged to be the utter immorality of this book by my excellent friend Mr. C.F.G. Masterman, in the 'Speaker.' The tendency of that criticism was to the effect that I was discouraging improvement and disguising scandals by my offensive optimism. Quoting the passage in which I said that 'diamonds were to be found in the dust-bin,' he said: 'There is no difficulty in finding good in what humanity rejects. The difficulty is to find it in what humanity accepts. The diamond is easy enough to find in the dust-bin. The difficulty is to find it in the drawing-room.' I must admit, for my part, without the slightest shame, that I have found a great many very excellent things in drawing-rooms. For example, I found Mr. Masterman in a drawing-room. But I merely mention this purely ethical attack in order to state, in as few sentences as possible, my difference from the theory of optimism and progress therein enunciated.
Toon meer Toon minder