The Dependent Empire and Ireland, 1840-1900 Advance and Retreat in Representative Self-Government Select Documents on the Constitutional History of the British Empire and Commonwealth--Volume V 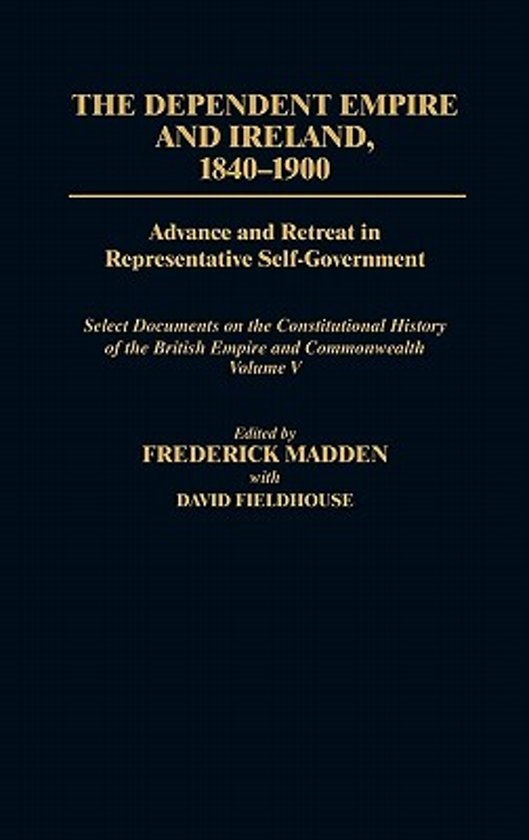 This volume--the fifth in a series providing key documents for the constitutional history of the British Empire and Commonwealth from the twelfth century to the twentieth--deals with those dependencies of the Crown where for various reasons it was considered premature to concede fully representative, let alone responsible, government, and also with Ireland where the union with Britain made in 1800 was coming under increasing strain. It covers the years from 1840 to 1900, in parallel with the companion volume IV which dealt with the four main settler colonies. The documents in this volume illustrate the ways in which Britain attempted to devise forms of government it was thought would be, at least in the short term, more suitable for dependencies which had few British settlers who might successfully operate a representative system--and where the majority of indigenous peoples needed protection against such a minority. There was, however, a desire that such colonies should be as self-governing and self-sufficient as possible, but a commitment to trusteeship operated against any rule-of-thumb concession of the sort of constitutions granted contemporaneously to settler colonies. The first section of this volume focuses on British imperial authority and the means whereby it attempted to exercise supervision over the scattered parts of the dependent empire (the so-called British settlements; protectorates under extra-territorial jurisdiction; the use of chartered companies). India is the subject of the second section: documents are here included illustrating the transfer of power from a chartered company back to the Crown and the hesitant moves toward quasi-representation on the Indian councils. A third section is concerned with the collapse of the old representative system in the West Indian colonies and the experiment with a responsive government in Jamaica. The fourth section shows what happened to the original Crown colonies and to new ones acquired in this period, together with adjacent spheres of influence and protectorates. There is then a section dealing with a group of special cases--the Ionian Islands, Cyprus, and Egypt, while the final section deals with the unique problems of Ireland and the attempts made to devolve a measure of internal self-government on John Bull's other Island to appease growing nationalist and inter-sectarian tensions.
Toon meer Toon minder