The Dominion of Voice Riot, Reason and Romance in Antebellum Politics 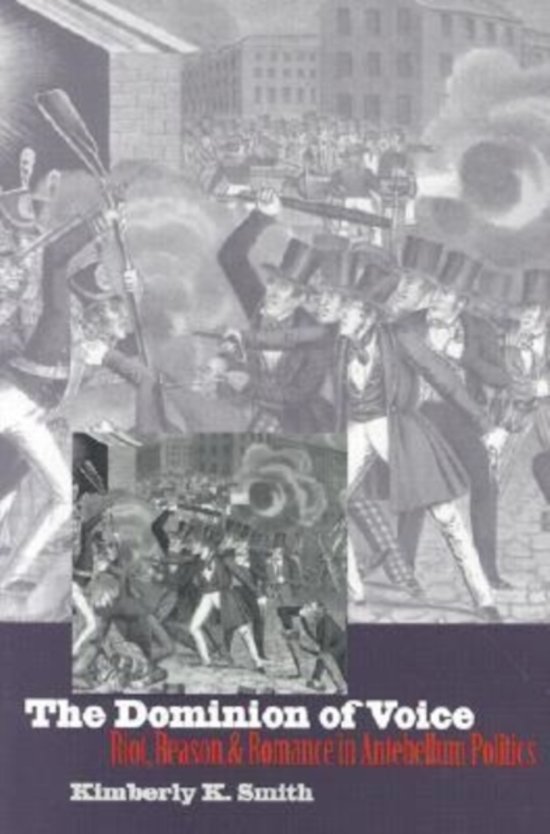 In this work of historically informed political theory, Kimberly Smith sets out to understand how nineteenth-century Americans answered the question of how the people should participate in politics. Did rational public debate, the ideal that most democratic theorists now venerate, transcend all other forms of political expression? How and why did passion disappear from the ideology (if not the practice) of American democracy? To answer these questions, she focuses on the political culture of the urban North during the turbulent Jacksonian Age, roughly 1830-50, when the shape and character of the democratic public were still fluid. Smith's method is to interpret, in light of such popular discourse as newspapers and novels, several key texts in nineteenth-century American political thought: Frederick Douglass's Fourth of July speech and Narrative, Angelina Grimke's debate with Catharine Beecher, Frances Wright's lectures, and Harriet Beecher Stowe's Uncle Tom's Cabin. Such texts, Smith finds, highlight many of the then-current ideas about the extremes of political expression. Her readings support the conclusions that the value of rational argument itself was contested, that the emergent Enlightenment rationalism may have helped to sterilize political debate, and that storytelling or testimony posed an important challenge to the norm of political rationality. Smith explores facets of the political culture in ways that make sense of traditions from Whiggish resistance to Protestant narrative testimony. She helps us to understand such puzzles as the point of mob action and other ritualistic disruptions of the political process, our simultaneous attraction to and suspicion of political debates, and the appeal of stories by and about victims of injustice. Also found in her book are keen analyses of the antebellum press and the importance of oratory and public speaking. Smith shows that alternatives to reasoned deliberation--like protest, resistance, and storytelling--have a place in politics. Such alternatives underscore the positive role that interest, passion, compassion, and even violence might play in the political life of America. Her book, therefore, is a cautionary analysis of how rationality came to dominate our thinking about politics and why its hegemony should concern us. Ultimately Smith reminds the reader that democracy and reasoned public debate are not synonymous and that the linkage is not necessarily a good thing.
Toon meer Toon minder

We assume that, like the air we breathe, reasoned discourse and rational deliberation are the way things are, were, and should be in a democracy. Smith argues that things don't have to be--and weren't always--that way, that passion has held and still retains a vital place in American political discourse. A brilliant book and significant contribution to both American intellectual history and political theory. --Jean Baker, author of Affairs of Party: The Political Culture of Northern Democrats in Mid-Century America A marvelous achievement. Smith's scholarly range is remarkable. She is equally conversant in nineteenth-century U.S. politics, the history of modern thinking about rhetoric, and contemporary political theory. This book cuts through the usual academic categories. It is about abolitionism and antebellum newspapers, the end of classical rhetoric, and the theory of Jurgen Habermas all at the same time. --Kenneth Cmiel, author of Democratic Eloquence: The Fight over Popular Speech in Nineteenth-Century America Smart, subtle, and provocative, Smith's book has something important to say about the terms and nature of democratic political life. Her writing is clear and lively, and her argument is interesting, particularly in taking on the very fashionable and very overrated emphasis on rational deliberation. --Wilson Carey McWilliams, author of The Idea of Fraternity in America Smith draws together works on republican theory, cultural studies, labor history, abolitionism, and political theory in a manner that will engage the interest of political scientists, historians, and students of American culture. --Louis S. Gerteis, author of Morality and Utility in American Antislavery Reform More than most scholars, Smith has a good feel for the texture of politics and the way that ideas and theories are used in action. Without disparaging reason, she argues persuasively that the ideal of rationality has been employed frequently to undermine radical democracy. --Joshua I. Miller, author of Democratic Temperament: The Legacy of William James This perceptive work expands the understanding of democracy an raises serious and thought-provoking questions about the predominance and meaning of the politics of reason. --Choice A valuable contribution to an expanding historical literature on the roles of reason, passion, and violence in antebellum political culture. --H-Net Reviews An innovative, provocative study that deserves the attention of scholars of American political rhetoric, particularly of the antebellum period. --Rhetoric & Public Affairs Intelligent, wholly accessible, and free of jargon of any kind. --American Historical Review This erudite book by a historically well informed political scientist challenges and historicizes the assumption that democracy and rational argument necessarily imply one another and that reasoned debate defines a democratic polity. --Journal of American History This book works on four levels: as a study of a particular historical period, as a critique of Habermas, as a comparison of three normative models of 'political practices, ' and as a commentary/critique on contemporary American democracy. --The Historian
Toon meer Toon minder