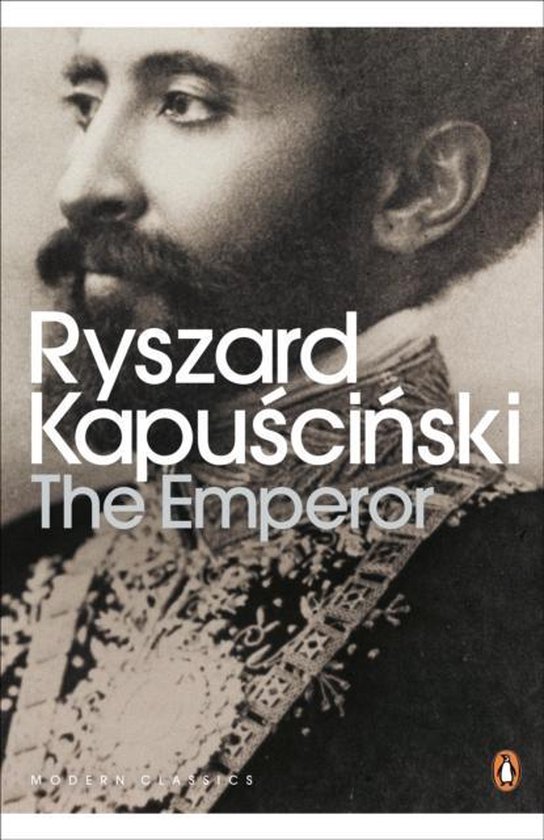 "Ryszard Kapuściński (Polish: [ˈrɨʂart kapuɕˈt͡ɕiɲski] ( listen); March 4, 1932 – January 23, 2007) was a Polish journalist, photographer, poet and author. He received many awards and was considered a candidate for the Nobel Prize for Literature. Kapuściński's personal journals in book form attracted both controversy and admiration for blurring the conventions of reportage with the allegory and magical realism of literature. He was the Communist-era Polish Press Agency’s only correspondent in Africa during decolonization, and also worked in South America and Asia. Between 1956 and 1981 he reported on 27 revolutions and coups, until he was fired because of his support for the pro-democracy Solidarity movement in his native country.

The Penguin Modern Classics edition of Ryszard Kapuscinski's The Emperor is translated by William R. Brand and Katarzyna Mroczkowska-Brand, with an introduction by Neal Ascherton. After the deposition of Haile Selassie in 1974, which ended the ancient rule of the Abyssinian monarchy, Ryszard Kapuscinski travelled to Ethiopia and sought out surviving courtiers to tell their stories. Here, their eloquent and ironic voices depict the lavish, corrupt world they had known - from the rituals, hierarchies and intrigues at court to the vagaries of a ruler who maintained absolute power over his impoverished people. They describe his inexorable downfall as the Ethiopian military approach, strange omens appear in the sky and courtiers vanish, until only the Emperor and his valet remain in the deserted palace, awaiting their fate. Dramatic and mesmerising, The Emperor is one of the great works of reportage and a haunting epitaph on the last moments of a dying regime. Ryszard Kapuscinski (1932-2007) was born in Pinsk, now in Belarus. Kapuscinski was the pre-eminent writer among Polish reporters. His best-known book is a reportage-novel of the decline of Haile Selassie's anachronistic regime in Ethiopia - The Emperor, which has been translated into many languages. Shah of Shahs, about the last Shah of Iran, and Imperium, about the last days of the Soviet Union, have enjoyed similar success. If you enjoyed The Emperor, you might like Norman Mailer's The Fight, also available in Penguin Modern Classics. 'Stunning ... a magical eloquence' John Updike, New Yorker '[The Emperor] transcends reportage, becoming a nightmare of power ... An unforgettable, fiercely comic, and finally compassionate book' Salman Rushdie 'Kapuscinski trascends the limitations of journalism and writes with the narrative power of a Conrad or Kipling or Orwell' Blake Morrison
Toon meer Toon minder