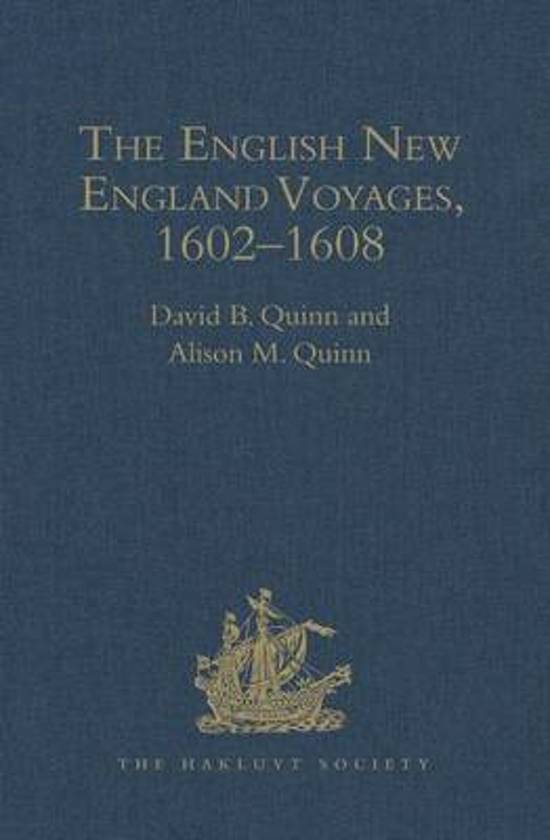 The publication of the narrative accounts of the voyages of Gisnold (1602) and Waymouth (1605) opened up for English readers what was then known as Norumbega, the later New England; They are the first documents of exploration of that region to have been published since that of Verrazzano's voyage (1524) in 1556. To the accounts of these voyages by John Brereton and James Rosier there was added by Purchas in 1625 the material of Martin Pring's voyage of 1603 and some scraps of information on the attempted colony by the Virginia Company of Plymouth at Sagadahoc on the Kennebec River in 1607-1608. The narrative of the voyage of the Mary and John, discovered in the 19th century, and now attributed to Robert Davies, remains our main authority for the 1607 voyage. Many ancillary documents are added to these essential sources. Most of these narratives have been edited in the distant past but they are now furnished with full information on fauna, flora, and above all, ethnography. The material which has become available on Indians of both northern and southern New England has enabled a full account to be given of them, while expert advice has been obtained in the edition of the Eastern Abenaki vocabulary of 1605. Considerable attention has been paid to topographical problems, to which new solutions are offered in a number of cases (though conflicting views are discussed in an appendix). The volume thus makes up a collection which is basic for the understanding of how Englishmen began to explore New England (and how its inhabitants learnt something of the English) and on how that important territory first came to light in detail. The narratives are of great interest in themselves and the biographical information which it has been possible to assemble in the introduction about a number of the authors and actors in the voyages and the colonising attempt of 1607 is valuable in enabling the reader to understand what they wrote and what they omitted. Professor and Mrs Quinn have worked on this volume for a number of years and their introduction and notes constitute an important addition to our knowledge.
Toon meer Toon minder