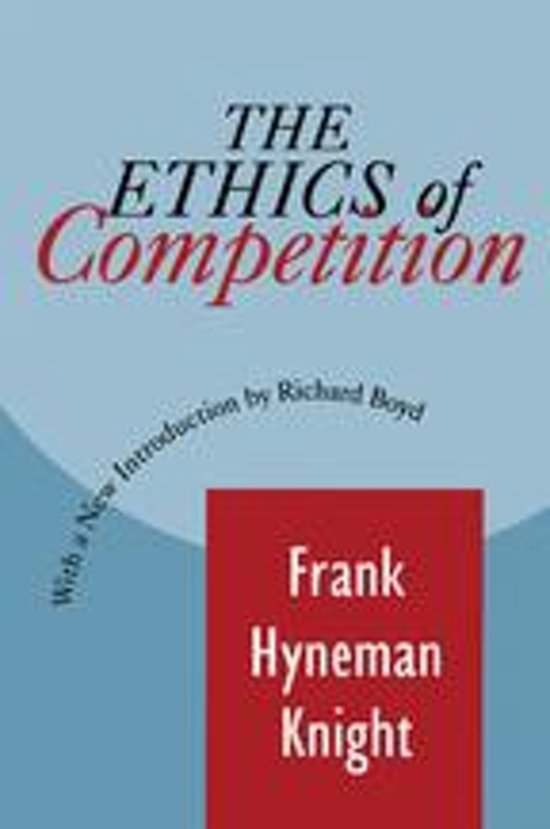 The Ethics of Competition is a book of Frank H. Knight's writings on a common theme: the problem of social control and its various implications. Knight believed in free economic institutions but was also aware that the competitive economic system could be improved. One of the central figures of neoclassical economics in the twentieth century, Knight pursued a lifelong campaign against irrationalities of nationalism, religious fanaticism, and group conflict, while conceding that these were fundamental orientations of human action that might yet frustrate his own work as an economist. While Knight vigorously defended human freedom and the liberal order, he also was sufficiently moved by the shortcomings of liberalism as to condemn it as rife with abuse.


As Richard Boyd writes in the new introduction, The Ethics of Competition is nothing short of visionary. Knight foresaw virtually all of the reductionistic tendencies that have come to plague the discipline he cultivated, neoclassical economic theory. Even more impressively, Knight related these disciplinary proclivities back to themes as grand as the fate of liberal democracy and human nature. Boyd discusses Knight's belief that the human craving for simple, mechanical explanations inevitably leads to frustration rather than material satisfaction. Chapters in The Ethics of Competition include ''Economic Psychology and the Value Problem,'' ''The Limitations of Scientific Method in Economics,'' ''Marginal Utility Economics,'' ''Fallacies in the Interpretation of Social Cost,'' and ''Economic Theory and Nationalism.'' This volume will be of essential value to economists, political theorists, philosophers, and sociologists.