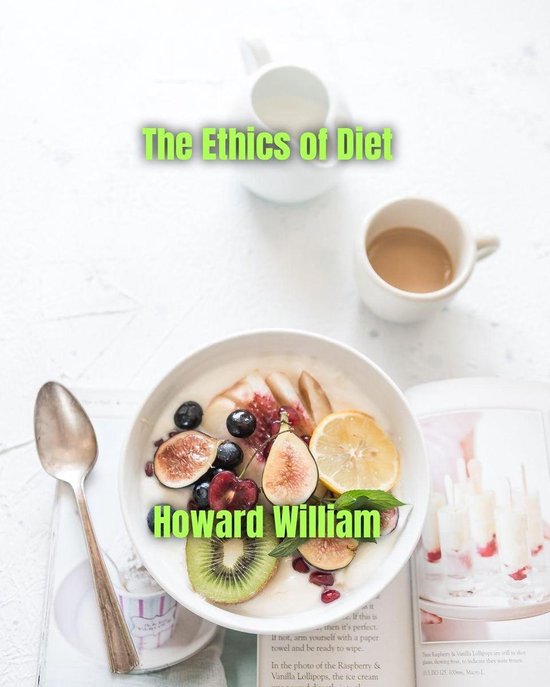 The Ethics of Diet

AT the present day, in all parts of the civilized world, the once orthodox practices of cannibalism and human sacrifice universally are regarded with astonishment and horror. The history of human development in the past, and the slow but sure progressive movements in the present time, make it absolutely certain that, with the same astonishment and horror will the now prevailing habits of living by the slaughter and suffering of the inferior species—habits different in degree rather than in kind from the old-world barbarism—be regarded by age more enlightened and more refined than ours. Of such certainty, no one, whose beau idéal of civilization is not a State crowded with jails, penitentiaries, reformatories, and asylums, and who does not measure Progress by the imposing but delusive standard of an ostentatious Materialism—by the statistics of commerce, by the amount of wealth accumulated in the hands of a small part of the community, by the increase of populations which are mainly recruited from the impoverished classes, by the number and popularity of churches and chapels, or even by the number of school buildings and lecture halls, or the number and variety of charitable institutions throughout the country—will pretend to have any reasonable doubt.

In searching the records of this nineteenth century—the minutes and proceedings of innumerable learned and scientific societies, especially those of Social and Sanitary Science Congresses—our more enlightened descendants (let us suppose, of the 2001st century of the Christian era), it is equally impossible to doubt, will observe with amazement that, amid all the immeasurable talking and writing upon social and moral science, there is discoverable little or no trace of serious inquiry in regard to a subject which the more thoughtful Few, in all times, have agreed in placing at the very foundation of all public or private well-being. Nor, probably, will the astonishment diminish when, further, it is found that, amid all the vast mass of theological-religious publications, periodical or other (supposing, indeed, any considerable proportion of them to survive to that age), no consciousness appeared to exist of the reality of such virtues as Humaneness and Universal Compassion, or of any obligation upon the writers to exhibit them to the serious consideration of the world: and this, notwithstanding the contemporary existence of a long-established association of humanitarian reformers who, though few in number, and not in the position of dignity and power which compels the attention of mankind, none the less by every means at their disposal—upon the platform and in the press, by pamphlets and treatises appealing at once to physical science, to reason, to conscience, to the authority of the most earnest thinkers, to the logic of facts—had been protesting against the cruel barbarisms, the criminal waste, and the demoralizing influences of Butchery; and demonstrating by their own example, and by that of vast numbers of persons in the most different parts of the globe, the entire practicability of Humane Living.

When, further, it is revealed in the popular literature, as well as in the scientific books and journals of this nineteenth century, that the innocent victims of the luxurious gluttony of the richer classes in all communities, subjected as they were to every conceivable kind of brutal atrocity, were yet, by the science of the time, acknowledged, without controversy, to be beings essentially of the same physical and mental organization with their human devourers; to be as susceptible to physical suffering and pain as they; to be endowed—at all events, a very large proportion of them—with reasoning and mental faculties in very high degrees, and far from destitute of moral perceptions, the amazement may well be conjectured to give way to incredulity, that such knowledge and such practices could possibly co-exist. That the outward signs of all this gross barbarism—the entire or mangled bodies of the victims of the Table—were accustomed to being put up for public exhibition in every street and thoroughfare, without manifestations of disgust or abhorrence from the passers-by—even from those pretending to most culture or fashion—such outward proofs of extraordinary insensibility on the part of all classes to finer feeling may, nevertheless, scarcely provoke so much astonishment from an enlightened posterity as the fact that every public gathering of the governors or civil dignitaries of the country; every celebration of ecclesiastical or religious festivals appeared to be made the special occasion of the sacrifice and suffering of a greater number and variety than usual of their harmless fellow-beings; and all this often in the near neighborhood of starving thousands, starving from want of the merest necessaries of life.

Happily, however, there will be visible to the philosopher of the Future signs of the dawn of the better day in this last quarter of the nineteenth century. He will find, in the midst of the general barbarism of life, and in spite of the prevailing indifferentism and infidelity to truth, that there was a gradually increasing number of dissenters and protesters; that already, at the beginning of that period, there were associations of dietary reformers—offshoots from the English parent society, founded in 1847—successively established in America, in Germany, in Switzerland, in France, and, finally, in Italy; small indeed in numbers, but strenuous in efforts to spread their principles and practice; that in some of the larger cities, both in this country and in other parts of Europe, there had also been set on foot Reformed Restaurants, which supplied to considerable numbers of persons at once better food and better knowledge.

If the truth or importance of any Principle or Feeling is to be measured, not by its popularity, indeed—not by the quod ab omnibus—but by the extent of its recognition by the most refined and the most earnest thinkers in all the most enlightened times—by the quod a sapientibus—the value of no principle has better been established than that which insists upon the vital importance of radical reform in Diet. The number of the protesters against the barbarism of human living who, at various periods in the known history of our world, have more or less strongly denounced it, is a fact which cannot fail to arrest the attention of the most superficial inquirer. But a still more striking characteristic of this large body of protestation is the variety of the witnesses. Gautama Buddha and Pythagoras, Plato and Epikurus, Seneca and Ovid, Plutarch and Clement (of Alexandria), Porphyry and Chrysostom, Gassendi and Mandeville, Milton and Evelyn, Newton and Pope, Ray and Linné, Tryon and Hecquet, Cocchi and Cheyne, Thomson and Hartley, Chesterfield and Ritson, Voltaire and Swedenborg, Wesley and Rousseau, Franklin and Howard, Lambe and Pressavin, Shelley and Byron, Hufeland and Graham, Gleïzès and Phillips, Lamartine and Michelet, Daumer and Struve—such are some of the more or less famous, or meritorious, names in the Past to be found among the prophets of Reformed Dietetics, who, in various degrees of abhorrence, have shrunk from the régime of blood. Of many of those who have revolted from it, it may almost be said that they revolted in spite of themselves—in spite, that is to say, of the most cherished prejudices, traditions, and sophisms of Education.

If we seek the historical origin of anti-kreophagist philosophy, it is to the Pythagorean School, in the later development of the Platonic philosophy especially, that the western world is indebted for the first systematic enunciation of the principle, and inculcation of the practice, of anti-materialistic living—the first historical protest against the practical materialism of every-day eating and drinking. How Christianity, which, in its first origin, owes so much to, and was so deeply imbued with, on the one hand, Essenian, and, on the other, Platonic principles, to the incalculable loss of all the succeeding ages, has failed to propagate and develope this true and vital spiritualism—in spite, too, of the convictions of some of its earliest and best exponents, an Origen or Clemens, seems to be explained, in the first instance, by the hostility of the triumphant and orthodox Church to the "Gnostic" element which, in its various shapes, long predominated in the Christian Faith, and which at one time seemed destined to be the ruling sentiment in the Church; and, secondly, by the natural growth of materialistic principles and practice in proportion to the growth of ecclesiastical wealth and power; for, although the virtues of "asceticism," derived from Essenism and Platonism, obtained a high reputation in the orthodox Church, they were relegated and appropriated to the ecclesiastical order (theoretically at least), or rather to certain departments of it.

Such was what may be termed the sectarian cause of this fatal abandonment of the more spiritual elements of the new Faith, operating in conjunction with the corrupting influences of wealth and power. As regards the humanitarian reason of anti-materialistic living, the failure and seeming incapacity of Christianity to recognize this, the most significant of all the underlying principles of the reformation in Diet—the cause is not far to seek. It lay, essentially, in the (theoretical) depreciation of, and contempt for, present as compared with future existence. All the fatal consequences of this theoretical teaching (which yet has had no extensive influence, even in the way it might have been supposed to act beneficially), in regard to the status and rights of the non-human species, has been w