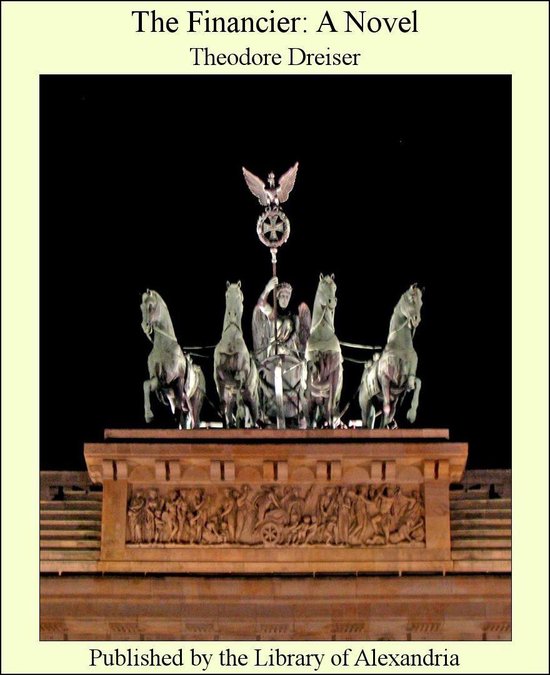 Theodore Dreiser was born in Terre Haute, Indiana, on August 27, 1871. After a poor and difficult childhood, Dreiser broke into newspaper work in Chicago in 1892. A successful career as a magazine writer in New York during the late 1890s was followed by his first novel, Sister Carrie (1900). When this work made little impact, Dreiser published no fiction until Jennie Gerhardt in 1911. There then followed a decade and a half of major work in a number of literary forms, which was capped in 1925 by An American Tragedy, a novel that brought him universal acclaim. Dreiser was increasingly preoccupied by philosophical and political issues during the last two decades of his life. He died in Los Angeles on December 28, 1945.
Alles van Theodore Dreiser
Toon meer Toon minder

The Philadelphia into which Frank Algernon Cowperwood was born was a city of two hundred and fifty thousand and more. It was set with handsome parks, notable buildings, and crowded with historic memories. Many of the things that we and he knew later were not then in existence—the telegraph, telephone, express company, ocean steamer, city delivery of mails. There were no postage-stamps or registered letters. The street car had not arrived. In its place were hosts of omnibuses, and for longer travel the slowly developing railroad system still largely connected by canals. Cowperwood's father was a bank clerk at the time of Frank's birth, but ten years later, when the boy was already beginning to turn a very sensible, vigorous eye on the world, Mr. Henry Worthington Cowperwood, because of the death of the bank's president and the consequent moving ahead of the Other officers, fell heir to the place vacated by the promoted teller, at the, to him, munificent salary of thirty-five hundred dollars a year. At once he decided, as he told his wife joyously, to remove his family from 21 Buttonwood Street to 124 New Market Street, a much better neighborhood, where there was a nice brick house of three stories in height as opposed to their present two-storied domicile. There was the probability that some day they would come into something even better, but for the present this was sufficient. He was exceedingly grateful. Henry Worthington Cowperwood was a man who believed only what he saw and was content to be what he was—a banker, or a prospective one. He was at this time a significant figure—tall, lean, inquisitorial, clerkly—with nice, smooth, closely-cropped side whiskers coming to almost the lower lobes of his ears. His upper lip was smooth and curiously long, and he had a long, straight nose and a chin that tended to be pointed. His eyebrows were bushy, emphasizing vague, grayish-green eyes, and his hair was short and smooth and nicely parted. He wore a frock-coat always—it was quite the thing in financial circles in those days—and a high hat. And he kept his hands and nails immaculately clean. His manner might have been called severe, though really it was more cultivated than austere. Being ambitious to get ahead socially and financially, he was very careful of whom or with whom he talked. He was as much afraid of expressing a rabid or unpopular political or social opinion as he was of being seen with an evil character, though he had really no opinion of great political significance to express. He was neither anti- nor pro-slavery, though the air was stormy with abolition sentiment and its opposition. He believed sincerely that vast fortunes were to be made out of railroads if one only had the capital and that curious thing, a magnetic personality—the ability to win the confidence of Others. He was sure that Andrew Jackson was all wrong in his opposition to Nicholas Biddle and the United States Bank, one of the great issues of the day; and he was worried, as he might well be, by the perfect storm of wildcat money which was floating about and which was constantly coming to his bank—discounted, of course, and handed out again to anxious borrowers at a profit. His bank was the Third National of Philadelphia, located in that center of all Philadelphia and indeed, at that time, of practically all national finance—Third Street—and its owners conducted a brokerage business as a side line. There was a perfect plague of State banks, great and small, in those days, issuing notes practically without regulation upon insecure and unknown assets and failing and suspending with astonishing rapidity; and a knowledge of all these was an important requirement of Mr. Cowperwood's position. As a result, he had become the soul of caution. Unfortunately, for him, he lacked in a great measure the two things that are necessary for distinction in any field—magnetism and vision. He was not destined to be a great financier, though he was marked out to be a moderately successful one