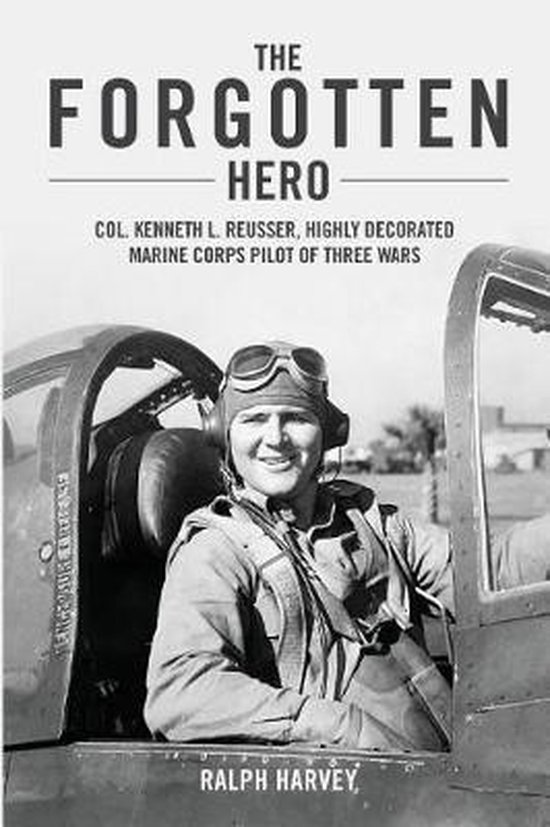 Growing up in a small farming community near the Oregon coast, Ken Reusser saw a 1920s barnstormer and dreamed of becoming a military pilot. Coming of age during the Great Depression, he overcame many obstacles and learned to fly in the pre-war Civilian Pilot Training program (CPT). Enlisting in the Naval Reserve, Reusser completed naval flight training as an enlisted Aviation Cadet and accepted a commission in the Marine Corps upon graduation. After that, it was off to war. Ken Reusser's twenty-seven year military career included two combat tours as a fighter pilot in the Pacific during World War Two, a deployment as a carrier-based pilot aboard U.S.S. Sicily (CVE-118) during the Korean War, and a period commanding Marine Air group 16 during the helicopter air war in Vietnam. Known as an aggressive combat leader, he was officially credited with shooting down 1.5 enemy aircraft in WW II, and was awarded a Navy Cross for a daring, high altitude intercept mission over Okinawa. Flying an F4U off Sicily near Inchon, South Korea, he was awarded another Navy Cross for leading an audacious attack on a tank repair factory and then destroying a concealed tanker at anchors. But his bold exploits and long list of medals came at a steep price. Reusser was shot down five times: twice in WW II, twice in Korea, and once more in Vietnam, and suffered serious wounds in all three wars. The Forgotten Hero is more than the true story of a celebrated Marine Corps pilot. This long awaited biography reveals Ken Reusser's entire life story, including both triumphs and tragedies, and provides a testament to the power of one man's faith, determination and courage. Leader quotes:This biography goes well beyond the retelling of brave deeds and fearless exploits. Every aspect of Col. Reussers remarkable life is covered with meticulous detail that left this reader in absolute awe. It is not often that one mans life can cover the sweep of history, but here is a compelling narrative that does so with style, momentum and depth. It should not be missed. Peter A. Young, a former Naval Flight Officer, flew the Grumman A-6A Intruder as a bombardier/navigator over South and North Vietnam and Laos.Colonel Ken Reusser is an American hero whose service and sacrifice represent true valor. From flying the skies over Guadalcanal, to serving with the legendary Black Sheep squadron in Korea, to surviving the harrowing crash of his helicopter in Vietnam, Col. Ken Reusser is a Marine who should be recalled with the top aviators of all time.Meticulously researched and vividly written, The Forgotten Hero is amazingly detailed and a must read chronicle of a highly decorated aviator whose story deserves to be remembered. Kevin Bennett, general manager of the American Heroes Channel.Colonel Kenneth Reusser was an amazing man and an amazing Marine. This book provides insight into his commitment to get the job done in combatvery specific details are provided. His commitment to serve our nation in time of war is a great example of why America wins warsour military people who do more than is required of them. Reusser is an example of why America is great. Lt. Col. Denny Gillem, U.S. Army (ret), is a West Point graduate, and a highly decorated airborne infantry officer and war planner. For many years Col. Gillem has hosted the nationally syndicated radio program Frontlines of Freedom.The Forgotten Hero contains everything you should know about his life and the dangerous combat missions Ken Reusser flew in World War II, the Korean War and Vietnam. Col. Warren MacQuarrie (ret), was a Marine Corps pilot who flew PBJ (B-25) Mitchell bombers during WW II and F4U Corsairs in Korea. Like Ken, Col. MacQuarrie also had a tour commanding Marine Air Group 16 in Vietnam, where the unit operated UH-1E, CH-46 and CH-53 helicopters.
Toon meer Toon minder