The Four Cosmic Pillars as Singularity 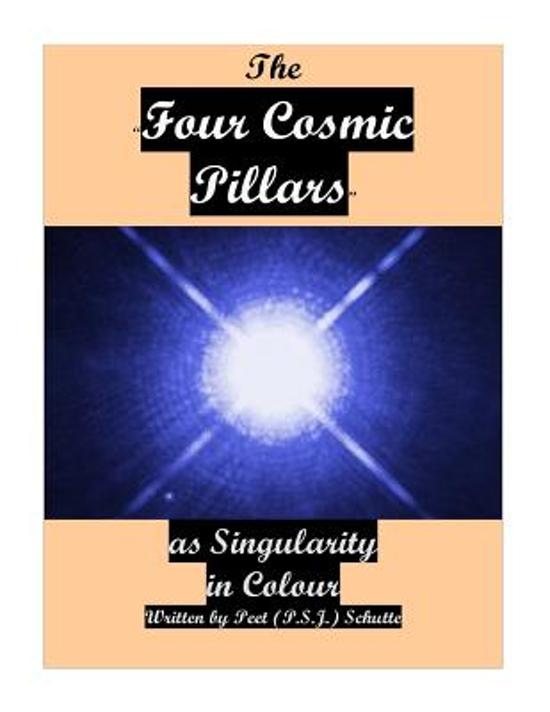 This book is in mono colour. In the precise middle of all objects in rotation is a precise centre dividing the object in sectors that will start the spinning initiation from that centre point. But the spinning object will have a middle point, a very specific centre point that does not spin and only holds P as a specific value. One value such a line cannot have is zero because zero does not start any line and therefore the value of the line must be infinite, just as described in accordance and by the definition of singularityThat point albeit hypothetical, is also as much a reality none the less is where that point must be standing still because every line running from that point in opposing directions are also in opposing directional spin to each other.The cosmos is made up of lines connecting everything to everything and that is why we have to look at lines. A line or spot starting at zero would therefore be shorter than the shortest line possible. For obvious reasons can no line, or any line grow or extend from zero because such a line must then quit zero and become something, thus abandon its original value. That would mean the start of the line has a different value to the end and a line holds conformity through out. When any line is starting from point zero it can never leave zero because of the influence of being zero disqualifies any possibility of growth. If the line then had to grow in all directions at the same pace the line must therefore be a circle or being three-dimensional, a sphere. In the case of the growing sphere the value of the circle is P, and that is where creation started. One would find singularity in the value P and the value P will be in all things rotating in a circle.You are about to discover science that was hiding in plane sight ever since man discovered science. In these articles you will find the solution to solving the following unexplained cosmic unknowns such as:What singularity is?Where to locate singularityWhat truly formed the Universe?What is the Titius Bode law? Resolving the Titius Bode lawExplaining the Roche limitIntroducing the Coanda effect as a major contributor to how gravity formsProving why the Lagrangian points are so important in forming the Universe.These articles introduce information that was never yet divulged in any form.Resolving any or all of the above were never yet achieved by any person in physics therefore this is a first ever.Be honest and think if you ever heard of these laws notwithstanding the importance thereof? If you have I would be most surprised because these laws are not in any promotion or secured within cosmology’s spotlight. They are in nature working as nature and nature has no other process of applying gravity than to form these four cosmic laws. Still science reject these laws and thereby reject nature in favour of Newton…and nature does not provide any inclination as to where Newton or his ideas could be found working. For the first time ever science can explain nature as I present these laws’ explanations.In the book you will find amongst so many other discoveries the one science has been on the hunt for since 1907, and that is discovering singularity. Einstein may have predicted it but I located singularity. You are now going to read the explaining of the Titius Bode law, the Roche limit, the Lagrangian Points and the Coanda effect. This line holds a spot that leads to our understanding of how everything that is also came about. However it seems in science no one is interested in finding out the truth about what Johannes Kepler’s correct findings were because it shows Newton is in error with his conclusions. This I say because for the past 20 years all my efforts went to waste as all my efforts were in vane. Science doesn’t wish to read that Newton was wrong about anything and moreover about science.
Toon meer Toon minder