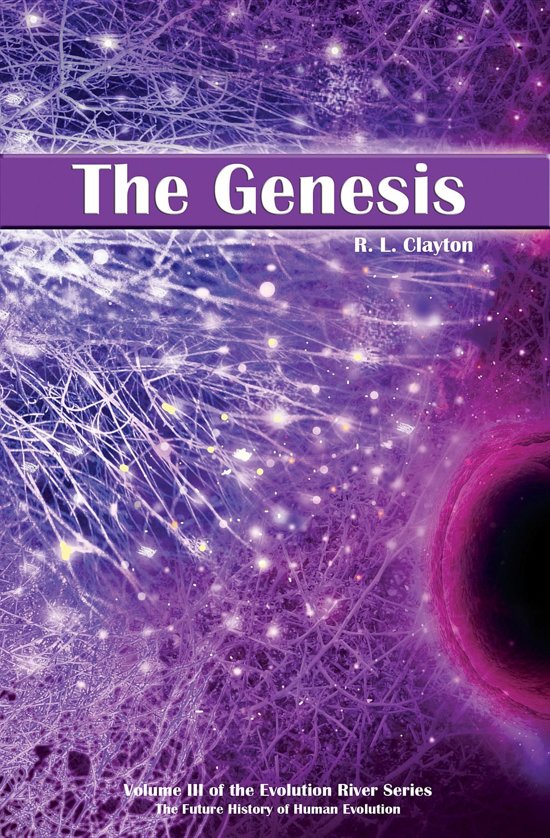 In The Genesis, the final volume in the Evolution River Series, humans and their descendants, the Homakuwans, struggle to rebuild after a string of meteorites destroy the ecology of the Earth causing massive extinctions. Using genetic technology, they accomplish in a century what nature does in millennia, and civilization is preserved, but almost 90% of the human population dies. They create machines to assist them that become a race of mechanical beings, Mechs. Conflict breaks out between the civilization of the United World Government and those outside of that control. The Homakuwans, learn that humanity must continue along the path that evolution has set them on, but they incorporate a novel solution to preserve the race that created them. The descendants of the descendants of humans expand their civilization into the Universe, where they grow and join the Universal Mind. New dimensions open up to them as they move beyond the physical, and they evolve again. The flow of evolution reaches its destination, and begins anew.


The ageless characters who evolved from humans in Sea Species continue their efforts to save the Earth and humanity after the devastating destruction of the ecosystem by the series of meteorite strikes. With ninety percent of the human population wiped out, civilization is on the brink of extinction. Only the genetic technology of the descendant species, Homakuwa, can bring the ecosystem back before starvation takes the last humans. The United World Governments holds civilization together as they recover, but a new society arises from those left out of the UWG plan. The technology of the past was saved, and a program to use robots for the labor force results in Artificial Intelligence and a new species on Earth. In The Envoy, Homakuwa expanded beyond Earth designing themselves as space creatures. They began to inhabit the other planets and design themselves for those environs. Homakuwa sends some of its members toward the center of the galaxy, and as they spread out into the universe, they again evolve into a new species until the cycle of evolution starts anew.


In The Genesis, the Humans and the new species on Earth, the Homakuwans, struggle to survive and rebuild the Earth after the catastrophic meteorite strikes. Using the genetic abilities of the new Homakuwans, they accomplish in decades what would take nature millennia. They then expand into the universe, voyaging to the end of evolution.